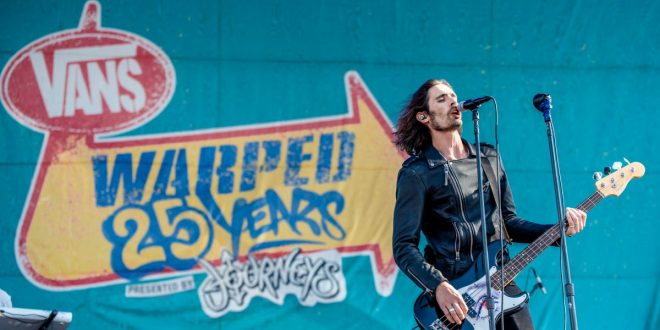 The All-American Rejects, everyone’s favorite 2000s rock band (whether they admit it or not), graced the main stage at Warped Tour’s 25th anniversary show for a set full of laughs and nostalgia bombs. Frontman Tyson Ritter had the audience wrapped around his finger as he poked fun of his band’s guilty pleasure status and teased the opening notes of “Move Along.” The massive crowd was one of the loudest of the weekend, screaming along to every word of “It Ends Tonight” and “Gives You Hell.”

The band recently released a three-song EP, Send Her To Heaven, on Epitaph Records. Watch the music video for the lead single and check out some shots from The All-American Rejects at Warped Tour below:

I write about music and live shows and other fun things. Strong feelings about pugs, Halloween, and burritos. Currently zooming around northern California, with frequent stops in LA.
@missdanajacobs
Previous Gallery: The Offspring at Warped Tour 25 in Mountain View, CA – 7.20.19
Next Gallery: Jidenna, Anik Khan and DJ MOMA at Prospect Park Bandshell in Brooklyn, NY (07.26.19)