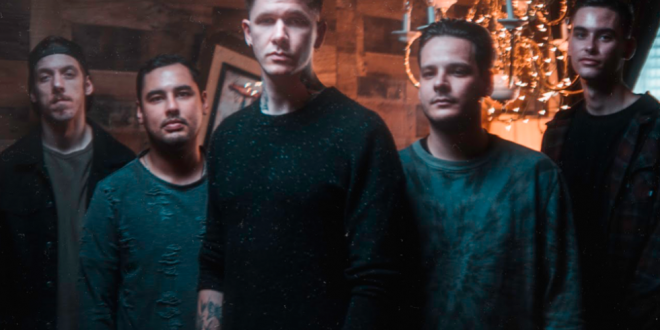 After much speculation on the future of the band following the departure of embattled singer Jonny Craig, Slaves return with new vocalist Matt McAndrew, former contestant of NBC’s The Voice. The new single “Heavier” is taken from their upcoming full length to be released later this year. The accompanying music video for the song was directed by Orie McGuiness.

“To me, ‘Heavier’ is about being trapped in a thought loop of worry, paranoia, and ultimately shame. I have a hard time letting my demons go and when they start affecting relationships, I really feel down on myself. It’s like a physical weight. I never thought I’d be in another band. After all, being solo offers complete artistic control and freedom. It’s only now that I’ve realized how lonely I’ve been by myself. Working with such a tight knit group is a blast, and meeting other bands that show such love for each other makes me feel accepted in a way that I haven’t experienced before” says McAndrew speaking about the song.

Speaking on McAndrew’s presence in the band drummer Zack Baker says, “Our new single came together so quickly. We all collaborate extremely well with each other and we feel that is represented in this new track. The song itself has a dark lyrical vibe encompassing everything Slaves has been about since our debut. Having Matt around has been a great time; he meshed well with us from the first day we met him. His extensive song writing background as well as his all-around musical knowledge have been a huge asset in the studio. I know we’re all excited for this new chapter of Slaves.”