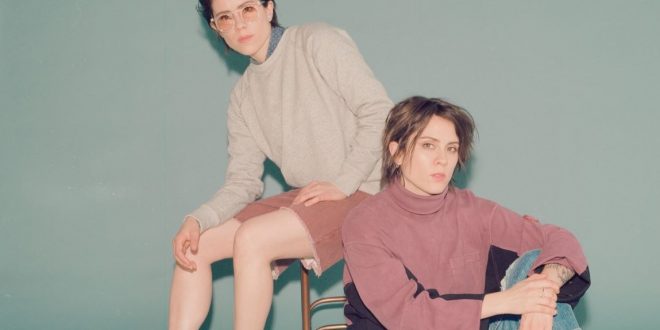 Tegan and Sara stream new single “I’ll Be Back Someday”

Today, as the pre-order launched for their new album, Hey, I’m Just Like You (Sire), Tegan and Sara shared the first single, “I’ll Be Back Someday,” an infectious track with an indelible chorus that bristles with punk rock fervor. Sara directed and created the illustrations for the lyric video, which can be viewed below.

Those four words – I’ll be back someday – also reverberate as a hint of the full-circle nature of their ninth studio album. While revisiting their teen years for their first memoir, High School – which will be published by MCD X FSG (USA) in hardcover, ebook and audiobook on September 24 – Tegan and Sara discovered two cassette tapes containing their very first songs, written between the ages of 15 and 17. With Hey, I’m Just Like You, set for release on September 27, Tegan and Sara return to the songs contained on those 1990s cassettes and reinvent them.

Hey, I’m Just Like You recasts Tegan and Sara’s remarkable innate songwriting talents as teenagers and allows these previously unreleased songs to benefit from the studio expertise they have gained in the past two decades as professional musicians. The album was recorded in Vancouver, BC in the spring of 2019 with an all-female team, helmed by producer Alex Hope (Troye Sivan, Broods).

Sara, recalling a pivotal moment in their lives, says, “We had been begging for an electric guitar, and on our 16th birthday, we got one. Of course, we had to share it, so it became a weapon that we stole from each other’s rooms, barricading ourselves behind locked doors with guitar in hand. Screaming over the small amplifier, we tested our voices by writing punk songs, shredding our thumbs on the strings.”

Tegan and Sara will bring the album and the book to life with an acoustic, interactive tour. Tickets for the North American headline run go on sale tomorrow, July 26, at teganandsara.com. One dollar from every ticket sold on the tour will benefit the Tegan and Sara Foundation, which fights for health, economic justice, and representation for LGBTQ girls and women.

Like their very first tours in the late 90s, the Hey, I’m Just Like You Tour will feature Tegan and Sara alone on stage. However, this will be a multi-dimensional show unlike anything they have ever done. They will read and relive stories from High School, perform songs from Hey, I’m Just Like You plus classic songs from throughout their career, and comb through archival video footage from their teen years. Through the lens of their own experiences, Tegan and Sara will celebrate all that is uniquely challenging about being a teenager – that short and singular span of years when the future seems wondrously, enticingly possible.

The shows will take place at intimate venues such as the MurMrr Theatre in Brooklyn, NY (September 24), Los Angeles’ Orpheum Theatre (September 28) and the Bella Concert Hall in Calgary (October 10). Tegan and Sara will partner with local independent bookstores in every city on the tour. See below for itinerary.

Tegan and Sara – Hey, I’m Just Like You Tour

**Purchase of any show ticket in Brooklyn, Los Angeles, San Diego, San Francisco, Portland and Seattle includes one copy of Tegan and Sara’s High School memoir, supplied by local independent bookstores they have partnered with to celebrate the release of the book.