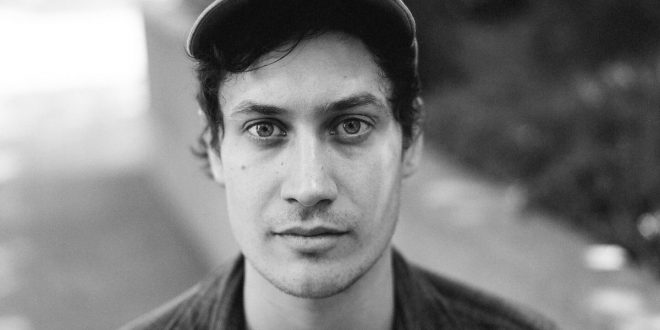 When you think of the term “emo” usually its the commercially successful acts like Fall Out Boy, My Chemical Romance, or Panic! at the Disco that come to mind. But look beyond that, you’ll find a selection of artists who’s sound is a bit more intricate, the big names you’ll recognize are Death Cab for Cutie or Manchester Orchestra. There’s also an amazing underground scene, that’s where John Van Deusen comes from. He cut his teeth with his band The Lonely Forest on that very scene and eventually parlayed it into success and The Lonely Forest would find themselves performing on national television and at some of the biggest music festivals in the US.

It all came to an end in 2014 when The Lonely Forest seperated, but Van Deusen continued on and is now back for more with a brand new solo album. (I Am) Origami Pt. 3 – A Catacomb Hymn was released last Friday on Tooth & Nail records and features much of the same sound that drove The Lonely Forest’s success in the past.

We talked to Van Deusen and asked him a little more about his current releases, read through the conversation now.

To purchase or stream John’s new album (I Am) Origami Pt 3 – A Catacomb Hymn click HERE.

I struggle answering these types of questions! I think the safest answer is that I write simple, hooky and emotionally vulnerable indie-rock music. Obviously, that changes a little depending on the album…but that seems to be the best answer!

I started writing songs in seventh grade. My dad recorded my first demos and drove me to my first gigs. The support of my parents was very important in those early days. Anacortes had a very vibrant music and arts scene when I was growing up, which clearly encouraged me to keep working at it.

I performed at a high profile battle of the bands in Seattle when I was 18, called the “EMP Soundoff!”. I went on to win the competition which helped bring my music to Seattle’s attention. The prize for winning was a performance on the Seattle radio station KEXP and recording time with famed producer Jack Endino (Nirvana, Soundgarden). It was a huge boost to my young career.

What does it take for an artist to stand out in a music environment like the one you’re from?

Today’s music world is undoubtedly overcrowded. I don’t really know what it takes to stand out because many of the popular artists I hear today strike me as uninspired and underwhelming. That being said, I do think that it takes good songs, a little luck and an electric personality. A little bit of charisma can go a long way! Whatever it is, I don’t think I possess it? Write me when you figure it out?

Hmmm… I’d say that people should expect an emotionally charged set in which I’m probably more vulnerable than a performer has any right to be. If I’m playing with a band, you should expect a set that vacillates between really aggressive and really gentle moments. I LOVE manipulating a crowd; as in, I like taking an audience on an emotional rollercoaster.

Do you typically write your songs on your own?

I’ve written 99.9% of my songs by myself, though I’d like to collaborate more with other writers in the future.

I think people should expect a new album, some shows and probably some nice surprises regarding future projects.

The first CD I remember purchasing was ‘The Colour and the Shape’ by the Foo Fighters. I would often steal CD’s from my older sister Krista. I remember finding the Cranberries ‘No Need To Argue’ in her room. But that Foo Fighters CD was the first thing I purchased with my own money.

I grew up watching my older sisters perform in youth symphonies. Does that count? I have a vivid memory of watching them play the Jurassic Park theme right before the movie came out. I loved it!
I think my first rock concert was probably seeing the Christian bands DC Talk and Newsboys when I was very young. I started actively going to shows in middle school; I saw bands like MXPX, Brand New, Rise Against, Anti-Flag, Good Charlotte, Relient K… a lot of pop punk. One of my first big shows was seeing Disturbed at a concert put on by local rock station 1077 The End. My dad took me home early because they had strippers on stage. At least, that’s how I remember it!