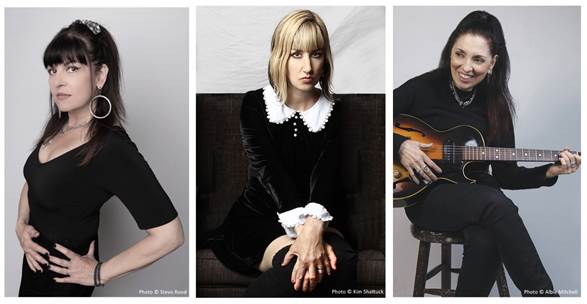 The Coolies is an east coast-meets-west coast supergroup comprising Kim Shattuck, Melanie Vammen, and Palmyra Delran. The three are not only bonded friends but seasoned musicians from the 90s alternative rock era. Former Pandoras members Kim and Melanie broke through with The Muffs, earning critical acclaim with their 1993 self-titled major label debut. Later in the decade and onwards, the early music of Palmyra’s all-female outfit, The Friggs, earned placement in cult-status films. Notably, “Bad Word for A Good Thing” appeared in 1999’s Jawbreaker, and “Shake” in 2008’s Superbad.

Starting in April 2018, the three friends decided to create The Coolies, which was done so right after coming up with the band name. “I just wanted to have a great band with [Melanie and Palmyra], and with our tastes in music, we really rule,” Kim says. Both Palmyra and Melanie agree that the trio’s sense of humor, as well as their musical chemistry, is what essentially drives the Coolies’ spirit. “It’s funny how the music that affected you the most as a kid, remains so powerful to you throughout your life. I feel like Kim, Melanie, and I speak the same musical language, so this collaboration is sort of an extension of our friendship, and it’s been so easy,” remarks Palmyra.

In fact, that very friendship predates alt rock’s heyday by several years. It initiated in 1986, when the scene was still bubbling. Kim proceeds to recall her instant connection with Melanie, as well as joining The Pandoras, a then-emerging garage punk quartet out of Los Angeles. “I met Melanie at a cool clothing store and I was totally starstruck because she was in The Pandoras. I ended up getting an audition from this meeting and we became BFFs immediately.” Soon after, the two linked up with Palmyra, a New Jersey native, while playing a Philadelphia show on the band’s tour, and would stay in touch through the years. Kim aptly states her first impression of her, observing that she was “tough as nails” but had a “heart of gold.” Additionally, Melanie has often accompanied Palmyra during her west coast gigs, another catalyst in getting The Coolies up and running.

Last Friday, the band released their debut EP, Uh Oh, It’s…The Coolies, which, according to Melanie, began to especially materialize throughout September and October. Palmyra further addresses how the process expanded. “At first it was going to be just a single – two songs. Kim and Melanie wrote a song together, then Kim and I wrote one. In the 11th hour, Kim sent us two more, we added our parts, and it became the six-song EP.” Much like the trio’s formative years, the EP alludes to heavier nuances of 80s garage and 90s indie rock, fittingly retro cover art included. Its opening track lead single, “Uh Oh!” immerses listeners head-on into these influences, with primary emphasis on a fun, carefree hook factor. “I hope the songs get stuck in their heads!” exclaims Palmyra, while Melanie adds, “Enjoy it! Being able to record and put this out means everything in the world to us!”

Following the EP’s release, the trio has decided to donate all proceeds from its sales toward research of amyotrophic lateral sclerosis (ALS), a progressive motor-neuron disease for which very little effective treatment, let alone a cure, exists. This cause particularly resonates with Kim and Palmyra, who have had loved ones affected by the disease. “It runs on my dad’s side of the family. I’m sick of this disease not having a cure,” Kim says. “Yeah,” Palmyra adds. “I had lost a few friends to ALS, and when I saw that Kim, her family, and friends were active in fundraising, I wanted to help.” Ultimately, the band strives to keep research for ALS in public consciousness. “I don’t think it’s just about us; it’s about finding a very solid cure for the most horrible disease,” concludes Kim, while Palmyra puts these efforts in summation, “Diseases can be figured out. New treatments can help with the quality of life. It’s time for ALS to be cured.”

I come from a family who is passionate about all things music. I learned to sing at an early age, and by 13, had my very own Fender Strat guitar. I tried my hardest at learning all that I could. Because I was born with cerebral palsy, I had to teach myself an adaptive playing style. I learned to write and record my own music, despite these difficulties. In college, I started making great use of my writing abilities by reviewing music, as well as copy editing. I guess it's best to stick with what you know, while welcoming a fair challenge at the same time.
Previous Carousel Kings Debut Music Video “Monarch”
Next Emarosa announce “Peach Club” fall tour