Home / Article / Artist Spotlight: The Beaches are coming to storm the US 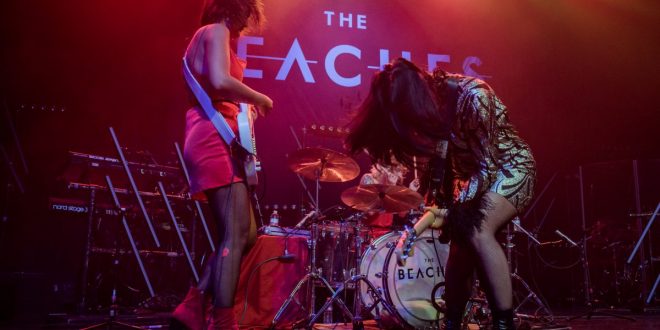 Artist Spotlight: The Beaches are coming to storm the US

The rock n’ rolling ladies of The Beaches are no strangers to pressure these days, having just shared the stage with The Rolling Stones, The Foo Fighters, and having Sir Elton John as one of their biggest celebrity fans. Hailing from Toronto’s trendy east-end neighborhood also called The Beaches, the band is comprised of sisters Jordan Miller (lead vocals/bass) and Kylie Miller (lead guitar/backing vocals), Leandra Earl (keys, rhythm guitar, and backing vocals) and Eliza Enman-McDaniel (drums). After a few EPs under their belt, the band released their debut album Late Show in October of 2017. The album got the seal of approval from Canadian rock royalty, as Emily Haines and Jimmy Shaw of the band Metric produced the LP. Since their initial debut, the band has taken over Canadian airways with two Number 1 singles, a Juno award, and a cross country headlining tour.

Their latest release, The Professional, is a five-song EP that was released just in time for the band to open for The Rolling Stones this month. The legendary rockers made their only Canadian tour date on the No Filter Tour 2019, at the Burl’s Creek Event Grounds, just north of Toronto. The EP builds upon the rock sounds of their debut album while adding more obscure pop elements into the mix. The band noted listening to a lot of James Brown and David Bowie while recording, and those influences can be heard on songs such as “Lame” and “Desdemona.” The band’s single, “Snake Tongue” brings in powerful bass lines, a catchy chorus, and tackles the ever-present issue women face on the daily of garnering unwanted male attention. The song has some of the bluntest, straight forward and raunchy lyrics that have been camouflaged well into a radio-friendly rock song.

Apart from catchy tunes, The Beaches strong suit is their live performance. Their songs, attitude, and onstage antics create for such a unique presence on stage you can’t help but feel like your best while in attendance to one of their shows. Kylie slays the guitar, Eliza keeps the girls on track, Jordan can stare down anyone with one of her front woman glares, and Leandra brings in an irreplaceable touch with her presence on keys. As a classically trained pianist, Leandra elevates live versions of songs like “T-Shirt” and “Boy Wonder,” to an entirely different level. The Beaches are not only bringing the fun back into rock n’ roll, but they’re doing it in style too. A sound that can only be compared to as the love child between Madonna and Nirvana, The Beaches have conquered the north and are now headed into the US. They will be joining Frank Carter & The Rattlesnakes on the Monster Energy Outbreak Tour this fall.