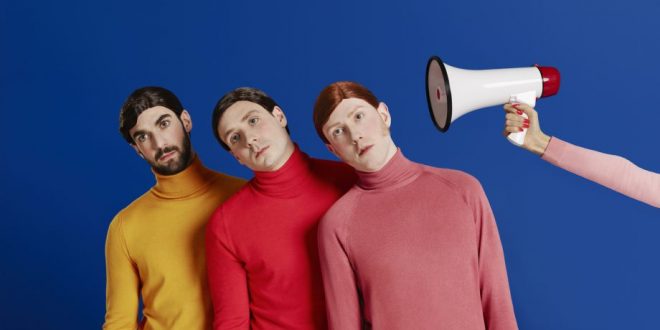 Created by Jordan Martin, the video combines retro 60’s footage with cutout collage animation, juxtaposing the excesses of pop culture with images of mass destruction. The result is a captivating zoom through humanity’s recent journey to destruction, soundtracked by the smog-clogged disco rock of ‘Dirty Air’.

“It was an extremely fun video to make,” says Jordan. “I searched through stacks of 60’s-70’s archive footage and magazines (I’ve started a pretty wild collection) to find the right look and feel for the track. It’s trial and error; reworking footage and printing it out, then physically collaging it. I love happy accidents when two things seem to fit together perfectly. I enjoyed taking lyrics from the song and letting a stream of consciousness try and piece together parts from all the imagery and footage that slowly builds and fills up my head.”

The band’s first album to be released in full collaboration with Prolifica Inc, False Alarm finds the three piece gloriously unshackled and at their creative peak. Across ten tracks False Alarm scans and satirises the social and environmental woes of 2019 through the prism of wonderfully off-kilter pop. Recorded in sessions between London and LA with producer Jacknife Lee, it’s an LP that takes the familiar and twists it to startling and stimulating effect. A wide-eyed, culture-encompassing leap forward for the band, ‘False Alarm’ is a record liable to break, ruin and remould pop in 2019.

Already well into festival season, having played Radio 1’s Big Weekend and Glastonbury, Two Door Cinema Club continue the party this month, with headline slots at Tramlines, Truck Festival and Y Not Festival, before they head out on a headline UK arena tour in the autumn, including a landmark show at London’s O2 Arena on October 11th.