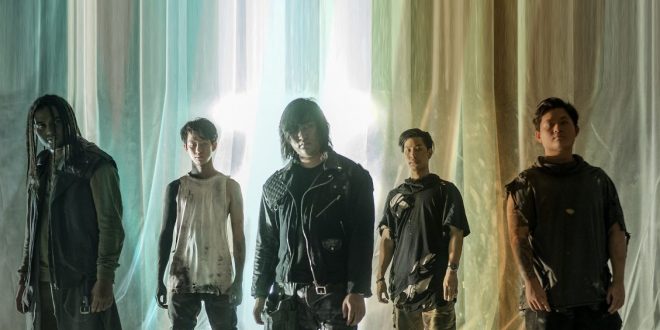 Defying Decay is an emerging Thai rock collective. Formed in 2011, the Bangkok-based quintet’s eclectic alternative metal sound has punctuated such singles as “Ghost,” “Existence of Extinction,” and “Judas Kiss,” which are representative of their debut album, Metamorphosis. A testament to their efforts, the band is currently on their very first tour of the United States, which continues until the end of July. Vocalist Jay Poom Euarchukiati was open to discuss the tour, his formative influences, and the band’s latest album, as well as their plans to expand their musical presence.

ME: This is your first time touring the United States. How’s it going so far?

Jay: It is awesome! It’s very fun to be around all these people from different parts of the world, like the guys from Within Destruction from Slovenia, Betraying the Martyrs from France, Entheos and Sentinel from the US. Every night is a vibrant, fun energy and we’ve enjoyed our time here so far.

ME: What do you think about the other bands that you’re touring with?

Jay: They are really very interesting people. They are great bands and musicians, and it’s a pleasure to be alongside them and perform every night with them. They are very approachable, and they’ve done their very best to help us out in this first US tour, so we appreciate that.

ME: In general, what drives your passion for performing live?

Jay: My love for performance is from the fact that we can get people excited with our music, and that’s pure bliss for me. As people get hyped up, I see they are enjoying their time and being happy is what gets me going.

ME: When you first started playing music in Thailand, which kinds of influences helped shape your musicianship?

Jay: I was inspired most by bands like Linkin Park, Deftones, Nine Inch Nails, Enter Shikari and Imagine Dragons. Their influence pushed me to get the kind of music I’m putting out today. They definitely inspired me to get out of the standard bass-drums-guitar trio type of band, and really explore electronic elements with metal – even dabbling in pop rock. They were the bands that shaped my thinking that sound can also be created with unconventional band instruments, like modular synths and whatnot.

ME: In the time you’ve been together, what do you notice about the chemistry between you guys, as friends, and as a band?

Jay: It’s been a lot of ups and downs because everyone has different personalities, and sometimes creative differences lead to twists and turns that we do not expect. However, that is all part of the process, and at the end of the day, we want the same outcome that reflects who we are as individuals and what we can do as a band.

ME: Your latest release, Metamorphosis, came out in June. During the songwriting process for the album, what kinds of ideas did you plan to be its focus?

Jay: The album itself thematically is quite dark. We wanted to focus on both internal themes that we’ve personally experienced but also external stories that we’d like to tell. As people, we all experience similar struggles and dark paths so no matter who we’re talking about, we know that on some level the audience could relate.

ME: You’ve released four singles so far, and the latest is “Let It Rain.” What do you notice about how newcomers to your music have been responding to it?

Jay: “Let It Rain” is more a throwback to our original style, in terms of songwriting as well as its message. For newcomers, it’s a good stepping stone into the new Defying Decay sound since it slowly introduces new elements such as synths, samples, and a variety of ambient sounds into a genre that we all know and love.

ME: Matt Hyde mixed the album in London, and Ted Jensen mastered it in New York City. How was your experience working with them?

Jay: It was really awesome to note how experienced those guys were, how they didn’t overcomplicate the mixing process, and how they aim to keep things organic. That really taught me the importance of keeping the mix natural so it could sound just right, and ultimately make the band sound good.

ME: Overall, what do you feel you’ve learned from making your first full-length album, and going on your first US tour?

Jay: As a band understanding how the overseas market works, there’s definitely a learning curve. We’ve had tons of great experiences such as meeting new fans, catching up with old fans, and just socializing and getting to know everyone in the industry. Of course, with every good thing in life, there may be roadblocks later on, but we’ve been able to adapt every step of the way.

ME: As your journey continues, do you plan to expand your presence throughout Asia further, or are you set on the United States and Europe for now?

Jay: We’re always trying new ways to reach new audiences, either by touring or by exposing ourselves through the internet. We believe that audiences of every demographic could listen to our music and relate to it on some level, personally or musically. You will see Defying Decay expanding internationally.

Jay: We’d like to thank everyone who’s listened to our material and shown up to our shows to meet us. It means so much that a band from Thailand could have fans across the ocean and have them be so receptive and welcoming to us. We’d also like to thank the new fans who have given us a listen for the first time and a chance at making this happen. Anyone who has kept an open mind about us deserves recognition, and we cannot thank those people enough!

I come from a family who is passionate about all things music. I learned to sing at an early age, and by 13, had my very own Fender Strat guitar. I tried my hardest at learning all that I could. Because I was born with cerebral palsy, I had to teach myself an adaptive playing style. I learned to write and record my own music, despite these difficulties. In college, I started making great use of my writing abilities by reviewing music, as well as copy editing. I guess it's best to stick with what you know, while welcoming a fair challenge at the same time.
Previous Miya Folick shares music video for “Malibu Barbie”
Next SHELITA delivers a breathtaking blend of straightforward pop