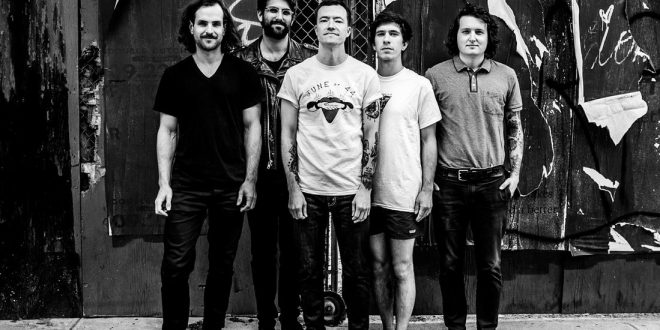 Today, Touché Amoré have announced the 10 year anniversary deluxe version of their debut album …To The Beat Of A Dead Horse (pre-order). Limited to 1500 copies, this deluxe version comes with a 148 page book with hyper detail from the genesis of the band up until Parting the Sea Between Brightness and Me. A foreword by Geoff Rickley as well as photos (with contributions by Angela Owens, Reid Haithcock, Ryan Alysworth and more), flyers, and even the email of a band member quitting.

Touché Amoré vocalist Jeremy Bolm shared his thoughts on the release saying: “We always wanted to have a hardbound book version like all of our other albums, so we waited patiently for the anniversary to make this special. It comes with two LPs. The original album from 2009, as well as a newly re-recorded version which was recorded by Zach Tuch (engineer on our song “Green”) and mixed by Kurt Ballou (Converge). You might be asking “Why re-record this album?” Mostly its because we physically couldn’t remix and remaster the 2009 version due to all the files being lost when the hard drive containing them crashed. We also just loved the idea of Elliot and Tyler getting to play on this album as they weren’t in the band at the time. We wanted the songs to sound like how we’ve been playing them these last bunch of years. Faster and with more energy. So thats what you get here. Geoff Rickley (Thursday) and Jeff Eaton (Modern Life is War) both stepped up to re-record their guest spots too. True fucking heroes. This project took over a year of work and was carefully laid out by Nick Steinhardt with reimagined cover art by Bart Balboa (Birds in Row). This is a one time pressing of this deluxe version, limited to 1500 copies. We hope you enjoy.”

The band will tour in support of the release playing on the following previously announced dates. Tickets for all dates are on sale now and are available HERE.