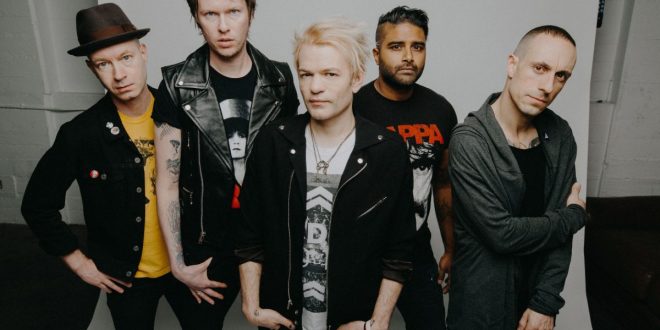 Sum 41 have released a fervent rock anthem today with ’45 (A Matter of Time)’. An honest statement from frontman Deryck Whibley, the song is his way of expressing how he feels about the current state of the world in the aftermath of the latest Presidential election.

’45 (A Matter Of Time’ joins previously released singles ‘Out For Blood’, ‘Never There’ and ‘A Death In The Family’ from Order In Decline, out July 19th on Hopeless Records. Looking back at the band’s storied 23+ year career, this album is undoubtedly Sum 41’s heaviest and most aggressive album to date, while also being their most dynamic and raw.

‘Out For Blood’ has landed the band in the Top 20 of a Billboard airplay chart for the first time since 2005. Currently holding the #18 spot on the Active Rock Radio Chart, the lead single has also hit #1 at Sirius XM Octane, and has been streamed over 4.48 Million times on Spotify while the music video has been viewed over 2.65 Million times. Combined with the other released singles, Order In Decline has already accumulated nearly 7 Million streams on Spotify.

Armed with the most honest and intimate songs of his career, Whibley poured everything he had into the upcoming album. Producing, engineering, and mixing the album in his home studio, he pain-stakingly crafted and fine-tuned each song, highlighted by fast and full riffs, guitar solos from lead guitarist/backing vocalist Dave Brownsound, harmonious chords from guitarist Tom Thacker and the heavy, heart-thumping rhythm section of bassist/backing vocalist Cone McCaslin and drummer Frank Zummo.