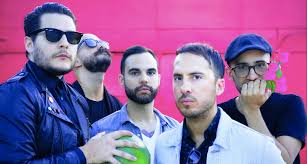 Sometimes the most enjoyable songs are the ones where the listener isn’t quite sure what the lyrics are saying, only that the rhythm and feel of the song invokes a feeling of awe and a multitude of immense pleasure. Modernage, a rock outfit that hails from Miami, Florida, transforms a seemingly-run-of-the-mill rock song, “Sideways”, into an atmospheric-like tune. It’s got the makings to satisfy fans of The Strokes, The Cure, The Temper Trap, Rilo Kiley and more.

According to Modernage’s biography and press release on “Sideways” “the songs inception began just before the band’s two-year hiatus, being temporarily shelved when guitarist Xavier Alexander moved to Hong Kong.  Ironically it was this shift that spurned the song’s completion, Xavier being inspired to finish and release the track after a powerful ayahuasca experience.” If you’re like me, you had to look up “ayahuasca” experience – it’s a brew that’s used as a spiritual medicine. Something in my memory also recalls that Irish actor Stuart Townsend played a character on Law & Order SVU that used this brew to assault his victims. I digress.

When “Sideways” starts there’s a haunting, falsetto voice that immediately croons the listener. It’s stirring and soothing at the same time. As a listener, not knowing about the ayahuasca beforehand, the song truly feels like a spiritual journey. While the music bed is fresh and modern, it creates highs and lows. It’s not goth in the sense that it’s depressing, but it can be jarring. Still, there’s a brightness to the guitars. As aforementioned, the lyrics were not my strongest focus. I became serene and so focused on the mood of the song I nearly realized that it had ended! I drifted into a far off place and the music carried me throughout corners of my mind that I had never explored or had forgotten. Perhaps that is the point of this song – a meditation of sorts.

“Sideways” has a visual component. The accompanying video is a stunning, black-and-white footage shot in the abandoned village of Fung Hang, near the Hong Kong – Chinese border. Interestingly enough, according to the band’s press release, it was also shot on an iPhone 5. Though colorless, the lush terra fauna is felt by the viewer; the buildings breaking down, rubble adrift and vacant surroundings. The music bed amplifies the full effect of confusion and that perpetual guitar riff. As the video plays, the music and the spiritual feeling come together. Supposing this video were made any other way, the backdrop of Fung Hang is essential to the visual presentation to this song. It just is.

“Sideways” is not a trippy song by any stretch of the imagination. But it is a song that dives deep into the listener’s psyche and takes hold. It’s that good.