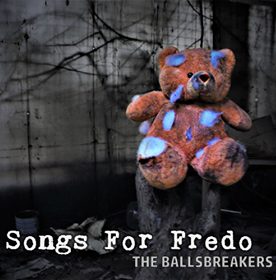 The Ballsbreakers is a Filipino band from Sibagat, Agusan del Sur. Formed in March of last year, the quintet punctuates their sound with alt-rock chord sequences and psychedelic spaciousness, brought together by a dash of pop appeal. Their debut album, Songs for Fredo, has gained steady momentum since its release in June, based on local radio play of pre-release singles “Theory of Devolution Part 1,” “Wish,” and “Like a Polyphonic.”

“Theory” does right as the opener, as it instantly establishes the album’s primarily rough-hewn grunge atmosphere. As the song progresses, frontman Jefferson Buag’s vocal tonality comes across as a clean, yet piercing complement to the intensity of the instrumentation. The song reaches a peak of sorts within its second half, where a seemingly disjointed, yet functional solo slowly unveils. In the track to follow, “A Shadow’s Ode to An Antique Streetlight,” that involvement is extended, both in its increased length as well as greater melodic emphasis during the verses. The bassline showcases decent presence, keeping sturdy command alongside the percussion. Once the chorus hits, the lead melody and vocals are a comfortable fit with one another, and the track’s eventual solo is this time methodically utilized. At the same time, these songs seem to tie together a cohesive ‘fly or die’ scenario, wherein someone feels compelled to act but dreads the fear of failure. By the third and fourth tracks, the straight-ahead “Oumuamua” and somewhat island-influenced “Wish,” the band gradually expresses a more experimental side, all the while tying this angle together. It is brought to a further understanding with the fifth track and current single, “When the Day Is Done,” which highlights the still-tense air even after such conflict is resolved, coupled with the inevitability of it happening again. I felt the guitars captured this sentiment, as they register as bright and uplifting on the surface, but with cloudy undertones.

From the mid to latter part of the album, there’s an initially slight (albeit still noticeably varied) shift in sound, beginning with the acoustic folk-driven “Pamphlet Number 99.” It’s at this point that, in terms of thematic leanings, the songs are approached with a kind of striving-against-all-odds mentality. With this song, as well as the similarly-styled “Like a Polyphonic,” there’s just something about the simplicity in the way the guitars and voice resonate that makes the presentation effective. The penultimate track, “Theory of Devolution Part 2,” is especially noteworthy for its stark stylistic contrast to its predecessor, consisting of a barebones bassline, sparse, reverberating licks, covered by a distorted, dystopian-themed rambling. Most of the guitar-based characteristics are carried over into the closing track, “Lucky,” but in a sensible way. I appreciate how, after all the fuzzy and overdriven framework of the previous tracks, there’s a refreshingly subtle, and all the more harmonic element that supplements it. Amidst this relatively calming change of tone, there is still a bleak context of having survived at the expense of others, and an ultimate air of somber solitude.

Overall, Songs for Fredo is a solid offering of The Ballsbreakers’ potential so far. Beneath its largely raw production approach, the band has a penchant for insightful, succinctly thematic songwriting, and clearly unites well in a full-length setting. In fact, I’m already looking forward to how they’ll further expand their sonic horizons in a future release.

I come from a family who is passionate about all things music. I learned to sing at an early age, and by 13, had my very own Fender Strat guitar. I tried my hardest at learning all that I could. Because I was born with cerebral palsy, I had to teach myself an adaptive playing style. I learned to write and record my own music, despite these difficulties. In college, I started making great use of my writing abilities by reviewing music, as well as copy editing. I guess it's best to stick with what you know, while welcoming a fair challenge at the same time.
Previous Gallery: Good Charlotte at Warped Tour 25 in Atlantic City, NJ – 06.29.19
Next Integriti Reeves’ releases “Eu Vim Da Bahia,”