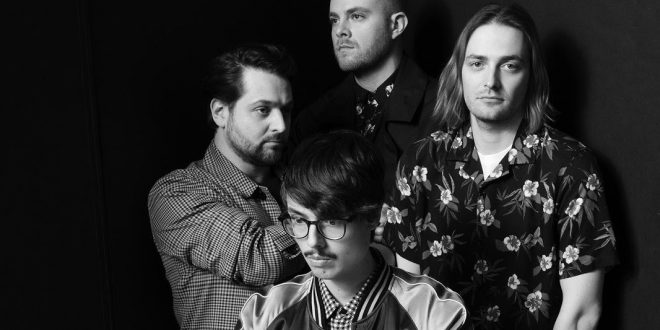 Produced at Joywave’s own studio in Rochester by founder Daniel Armbruster, arranged by Armbruster and his fellow band members Joseph Morinelli, Paul Brenner, and Benjamin Bailey, and then mixed by Dan Grech-Marguerat, “Like A Kennedy” offers a clear display of the acclaimed band’s evolution from the basement to the big stage, to their current role as full-fledged pop iconoclasts, fearlessly assimilating genres, motifs, and big ideas into its own one-of-a-kind identity.

“I think a lot of people will probably try to fit this song into some type of political narrative,” says Armbruster in an exclusive audio commentary on the track, “but that’s really not the point. It’s a song about complete exhaustion and media burnout. It’s an anti-chaos song. Every screen you walk by DEMANDS your attention. Everything is BREAKING NEWS in all caps. It’s a really difficult time to think about the mundane small-scale things that have been the focus of human existence until very recently. I don’t think people should check out, but I think it’s beneficial to at least zoom out and not take the bait every time. It feels like everything is designed to keep us enraged 24 hours a day. We deserve a little sanity.”

Currently wrapping up their eagerly awaited third full-length LP, Joywave will herald the album with a very special series of intimate live performances. “The Possession Sessions” begin next Saturday, June 29 in the band’s hometown of Rochester, NY and then continue with exclusive shows in Los Angeles, Brooklyn, and London. General on-sales begin today at 1 pm ET. For complete details and ticket availability, please see https://joywavemusic.com.