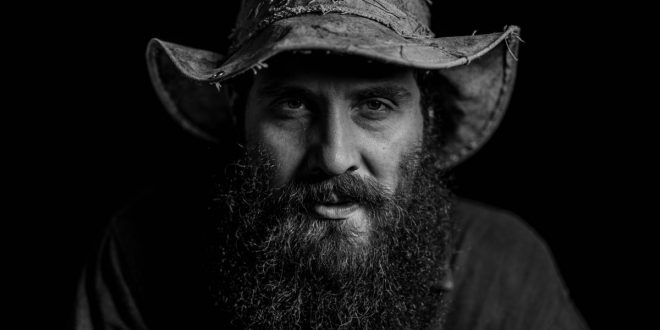 delivered with a deep Nick Cave tone, William Crighton this week returns to the UK for 8 shows, including a pair of London and and 2 appearances at Black Dear Festival.

Standing at two metres tall, with a long dark beard and piercing blue eyes William Crighton is a modern bush balladeer who combines traditional music with unexpected experimentation and who writes songs fuelled by real experiences and hope.

In support of latest album Empire he’ll be playing 8 UK shows this month, including appearing at Black Deer Festival:

Born in the rural town of Dubbo in 1985, situated in western NSW, Australia. Crighton spent the majority of his formative years living with his mother and younger brother traveling from place to place within the Riverina.

He left the Riverina aged 19 and after a long journey he arrived back there in 2013 to a place called Burrinjuck, a place near the top of the Murrumbidgee river in NSW, this would be where Crighton, whilst on one of his many walks into the bush became inspired to tell these stories and a long with his wife Julieanne, Brother Luke and long time friend Matt Sherrod would write and record his first album.

“I’ve spent a lot of time in the bush but this day I began seeing things differently than I had previous, I’d had my first conversation with mother Earth and that gave me what I needed to confront things that I couldn’t before ” – Crighton

Crighton has recently completed a sold out tour of Australia as well as touring with Lukas Nelson & The Promise of the Real for the Australian leg of their world tour. Nelson described Crighton as a “Forward Thinker” on stage at the bands Sydney show.

With his third album underway and set for release mid 2020 William Crighton’s family of dedicated fans continues to grow.

He has toured with the following artists: Lukas Nelson & The Promise of the Real, The Beachboys, CW Stoneking, Dan Sultan, Gawurra, Vikki Thorn, Beans on Toast, Terra Lightfoot, and Claire Anne Taylor

Previous Gallery: Avatar at The Mayan Theatre in Los Angeles on 6/13/2019
Next Exam Labs Recommendations: Web Resources to Excel in Your Cisco CCNA Routing and Switching Exams