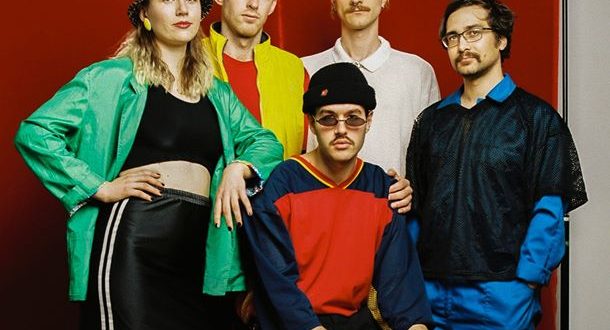 Single Review: Bridal Party – Too Much

Lacy, lush and light as a feather – the vocal track adorning the soft percussive pulsating in Bridal Party’s “Too Much” is right there, waiting to spellbind us with its magnetizing melody at the onset of this all-new track from the acclaimed indie five-piece, and it’s only a small sampling of what the next three minutes and eleven seconds of sheer summer swing have in store for us. In Bridal Party’s latest single, the band takes a conservative approach to a familiar strain of surrealism, and ends up yielding a stylish sound that is, ironically, larger than life in every way that truly counts.

The bassline here is super-funky, and it lends to the soulful crooning of our lead singer, as well as the chic drum pattern behind her. There’s so much texture in the low-end of “Too Much” that one could make the argument that the instrumentation is often even more evocative than the words are on their own. Bridal Party may not have been intending to do as much, but they’ve undisputedly elevated their brand into experimental territory with the release of this song; they’re not playing by anyone’s rules but their own, and that alone makes their new material more than worthy of a curious audiophile’s time this season.

This percussion is efficiently arranged and nonintrusive when it comes to keeping the spotlight transfixed on the honeysweet vocal harmonies. The beats are very meticulous in their design, but you can tell that Bridal Party were trying to keep the rhythm a little looser than the actual melodies in the instrumentation are. The bass shadows the drums’ devastatingly sensuous march, which makes the temptation to shake in cadence with their steps all the harder for us to resist, regardless of where we’re listening to the song at the moment.

“Too Much” has a very streamlined master mix, and for the most part it’s devoid of the macho physicality that has been all too common in the stagnant sound of mainstream alternative pop recently. There aren’t any unnecessary bells and whistles thrown into this melting pot of mighty harmonies; there is only Bridal Party and their unfiltered stage presence, which leaves me wondering just how powerful their performance would be atop a stage before a crowd of hundreds of adoring fans, whose energy and enthusiasm would only contribute to the excitement and endearing play of the headlining band.

I had a feeling that I was going to dig the new Bridal Party track, but I must say that I wasn’t expecting this Canadian crew to impress me as much as they did with “Too Much.” “Too Much” sports one of the more relaxed rhythms of any that song I’ve had the pleasure of absorbing in the last few months has, and despite the patient pace that it unfolds under, it affords us not a single dull moment in the three minutes and change that it fills our airwaves with opulent tonality. This is Bridal Party at their most focused to date, and it’s a song that I would dub a fun listen for anyone who enjoys smart indie pop.