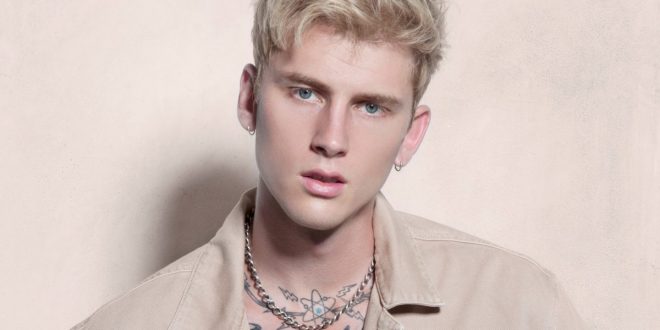 Machine Gun Kelly showcases his versatility on his newest single, “I Think I’m OKAY” featuring Blink 182’s Travis Barker, and genre-bending newcomer, Yungblud. The alternative/rock track, produced by SlimXX, BazeXX and Machine Gun Kelly, manages to combine dark lyrics with a sonically summer vibe. MGK infuses a touch of melody into his rhymes while, Yungblud rounds out the song with driving vocals. Backed by a live band, the rapper debuted “I Think I’m OKAY” last week during the Bunbury Music Festival in Cincinnati. In celebration of its official release, the song aired today as part of Zane Lowe’s World Record on Apple Music’s Beats 1.

MGK has had a big year thus far, both on wax and in film. The Cleveland artist has been releasing music weekly in advance of his forthcoming album, Hotel Diablo. The first teaser tracks, the soul-baring “Hollywood Whore” and the hip-hop heavy “el diablo,” were met with high praise; with the Jordan Wozy-directed visual for “Hollywood Whore” serving as an ode to the late Chester Bennington of Linkin Park. MGK’s on-screen endeavors have been just as promising. He kicked off 2019 with fans still buzzing about his appearance in Bird Box. Most recently, he starred as Tommy Lee in Netflix’s Motley Crue biopic, The Dirt. Machine Gun Kelly is currently on the road, headlining his Hotel Diablo World Tour. Fans can also catch him live at the annual EST Fest on August 2nd and 3rd in Butler, OH.