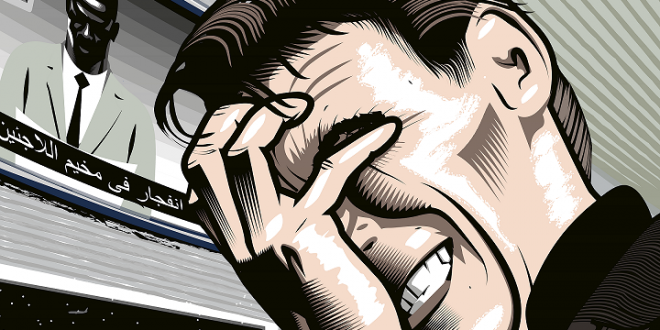 Visionary rock band Nowhere Nation have released their debut single, “Omicron,” the title track from the band’s forthcoming visual concept album that tells the story of a corrupt, beyond-secret government agency. Created by Arthur Blume and produced by Doug Rockwell, each track from Omicron threads together a rich concept depicted across the album’s twelve tracks arranged to mimic an adrenaline-pumping mini-movie.

Omicron (release date TBA) is inspired by the current socio-political climate in the United States, and features accompanying graphic-novel-style illustrations by Aidan Hughes of KMFDM fame. The mysterious and alluring “Omicron” recounts the first part of the album’s gripping story, which depicts a revolutionary romantic triangle between a secret agent, an assassin, and the head of an uber-secret agency all through the lens of social critique. “Omicron” introduces the story of Seven, a secret agent that finds himself in a state of constant paranoia and hypervigilance, haunted by flashbacks of the immoral operations he’s been involved in.

Safely in an airport after killing one of his pursuers, he sees news of a bombing in a refugee camp, feels haunting guilt for placing the bomb, and resolves to leave the agency. The cinematic instrumentals and lyrics provide a vivid look into the character’s perturbed state of mind. Seven reflects: “what’s my name and what’s my crime / a whole life I don’t recognize.”

“Omicron, both the album and the song, mean a great deal to me. I’ve spent years ruminating about the challenges America and the world has faced over the last twenty years, the trials yet to come, and how people will grapple with those challenges both alone and amidst all kinds of relationships,” shares Blume. “I feel incredibly lucky to be bringing this story and characters to life via Doug Rockwell’s amazing production and Aidan Hughes’ unforgettable art, and I’m beyond excited to finally welcome listeners into the world of Omicron and beyond.”

How did you first get started in music?

I started with piano lessons when I was five, and picked up guitar when I was 16. I also did a lot of singing in college, and followed that up with Berklee College of Music, where I studied songwriting and finally got going in earnest on creating albums.

I’ll get back to you. 🙂 I’ve just released my first album and am now planning live performances!

What does it take for a band to stand out in a music environment such as where you’re from?

Something extra — a surprising or whimsical element. One band that really stood out to me in the Boston area always dropped the vibe on their choruses down to a cooler and jazzier vibe rather than getting more intense as I’d expect. Another had an amazing guitarist who had dreadlocks and performed in full-length footie pajamas. My “extra” is the illustrations that accompany my album, by Aidan Hughes of BRUTE! Propaganda.

In many cases you’re going to hear a pretty fully realized version of what’s on the album, but you are also likely to hear some of my more laid-back tunes backed by solo acoustic piano or guitar. Also you’re quite likely to see animated versions of the album art as a major element in the show.

Do you write your own songs?

You’ll hear the rest of the Omicron album, and likely you’ll also hear at least a track or two from the follow-up album, which is already written — we’re starting recording this month.

You’re about to notice a theme here. 🙂 Probably a U2 album such as The Joshua Tree.

Undoubtedly U2. Muse and Lorde both had a big influence on the Omicron album.