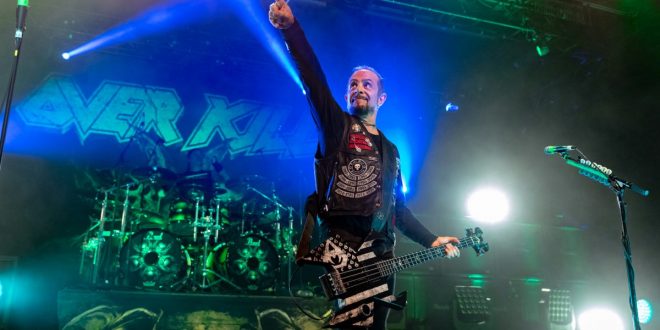 Still hot off the recent release of their 19th studio album The Wings of War, New Jersey’s very own thrash metal veterans Over Kill flew through the gutters of The Garden State across the river to New York City’s Times Square. Met by the thunderous roar of the sold out crowd of sweat dripping thrashing maniacs, Bobby Blitz took center stage in classic form, one foot on the monitor and one hand on the mic as the band dove right into “Last Man Standing” the first single off of The Wings of War, the floor engulfed into one giant pit, bodies immediately began coming over the barriers in true thrash fashion as the unmistakable howls of Bobby Blitz ripped through the building. Highlighting the set early with an old school classic “Hello From the Gutter” was followed by Blitz saying “You look good mother fuckers you look good, Two Rules, first rule I’m in charge, second rule don’t be a pussy, Long ago and far away, the record was called The Years Of Decay” highlighting yet another classic “Elimination.”

The bands set was insanely tight as they smashed song after song from the set with un-relentless brute force as chaos reigned supreme in the pit. Feeding off of the energy from the hometown/neighboring crowd kept everyone in the building completely in good spirits that night which kept Blitz cracking jokes in between tracks. Before going into “Bastard Nation” Blitz asked the crowd “You alright? I’m feeling pretty good, you’re making me feel like I’m 59 years old again, I might even get a hard on.” Tapping back into the classics it was time go back to where it all started with 1985’s debut title track “Feel The Fire” followed by the sets closer “Rotten to the Core” which was featured on the 1985 debut.

The night however wasn’t quite over just yet, Blitz wanted to let the crowd know something, something his Mom said “Bobby, I want you do what you love to do, and I want you to do it with people who love to do it with you” Blitz let the sold out crowd know (“That’s you!”) as he open his arms wide to the crowd and then to his fellow band mates. The closing encore for night included “Ironbound” and  band’s signature cover of the Subhumans “Fuck You,” “Welcome to the Garden State” and finishing up with a “Fuck You” with Blitz and the crowd hoisting their middle fingers high in the sky for the perfect ending.

NewYork Based Photographer. Music Enthusiast with a background in Graphic Design. Whether I'm shooting a live event or just out wondering the streets its about capturing the moment.
Previous Gallery: Evanescence live at MMRBQ2019 in Camden, NJ (05.18.19)
Next Live Review + Gallery: Life Of Agony at Playstation Theater New York, NY (05.10.19) 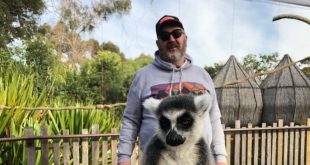