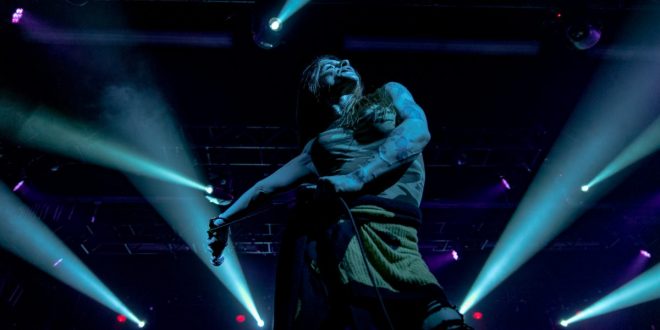 In 1992 Life Of Agony toured with Over Kill, and once again Brooklyn’s very own Life Of Agony would join the veteran thrash metal heavy weights Over Kill along with Death Angel and Mothership for a special one night only show in New York City. Though Life Of Agony aren’t a thrash metal band, their crossover blend of alternative metal and hardcore was a well placed change of pace in the set following thrash veterans Death Angel.

Life Of Agony lead by the ever charismatic front-woman Mina Caputo stood atop the stage monitors and grooved her way all over the stage while putting on a performance that as always was nothing short of excellent alongside bassist Alan Robert, guitarist Joey Z., and drummer Veronica Bellino. The setlist was highlighted by tracks such as “This Time” and “Underground” both featured on the bands debut LP 1993’s River Runs Red which the title track was also featured on the setlist, others tracks included  were “This Time”, “Method of Groove” and a live debut of “Empty Hole”. In-between tracks Caputo made it her point to thank fans for supporting live music along with throwing out bottles of water to the sweaty crowd of fans raging through their set. Caputo also stated “They’re trying to take it all away from us, trying to replace us with holograms and shit but that’s fucking bullshit” which was met by a thunderous roar from the sold out crowd.