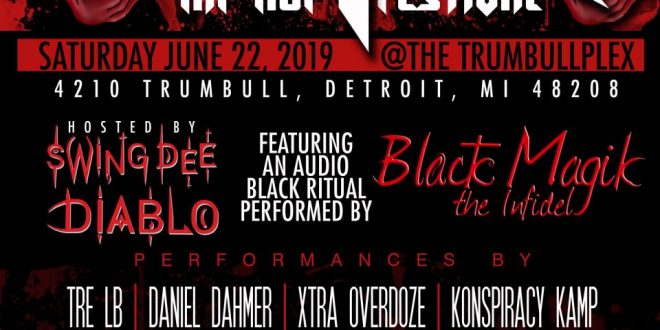 Michigan native Swing Dee Diablo had a great year in 2018 and is poised for even greater success in 2019. His The Darkest of the Dark album was hailed by critics, like us here at this very music site and we’ve already gotten a taste of what’s to come with his recent single ‘Warlock of Flows.’ Diablo will be wrapping up recording his new album Skullator in June, but you can also catch him hosting The 1st Annual Dark Hip Hop Festival, where his friend and labelmate Black Magik The Infidel will be doing some type of “Black Audio Ritual”. Sounds like fun.
Info on The 1st Annual Dark Hip Hop Festival below.

Stephen Vicino is the founder of MusicExistence.com. He created this site to give talented musicians a voice and a way to be discovered.
@@svicino
Previous Live Review + Gallery: Teyana Taylor: House of Petunia at Grand Ballroom at Manhattan Center (05.15.19)
Next Gallery: American Football + Illuminati Hotties at The Wonder Ballroom in Portland, OR 05.15.2019