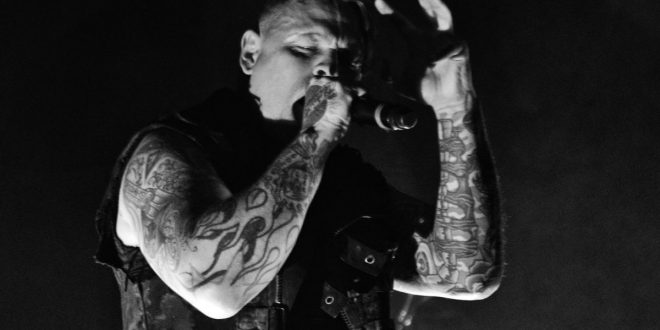 Combichrist is currently on the One Fire World Tour hitting cities all across North America before heading over to Latin America and Europe. I, of course had to attend a show or two or…you know what? Does it matter how many? Point is, the boys were back in town, better than ever, and I was excited. New York City’s industrial duo Xentrifuge was the first to hit the stage followed by California’s alternative band and Silver Snakes. Both bands had exciting performances that worked up the crowd with eager anticipation.

Combichrist broke through the silence with ‘This Shit Will Fuck You Up’ and the rest of the setlist most certainly did fuck you up. The band raged through their latest singles ‘Hate Like Me’ and ‘Guns At Last Dawn’ off the new album One Fire which will debut on June 7th through Out Of Line Music. The rest of the setlist included crowd favorites such as ‘Satan’s Propaganda’, ‘Throat Full of Glass’, and ‘They’.

Frontman Andy LaPlegua, guitarist Eric 13, and new drummers Dane White and Will Spod and even crew members use every opportunity they can to engage and interact with the audience and make them part of the show. Those are memories fans take with them forever.

To learn more about Combichrist make sure to check them out at the links below:

Concert lover, music fanatic. If it sounds good to me, the rest doesn't matter.
@njaziaddict
Previous Shinedown Release New Video For Piano Version of Hit Hot AC Single “GET UP”
Next Jon Dowling’s “Don’t Wanna Own the World”