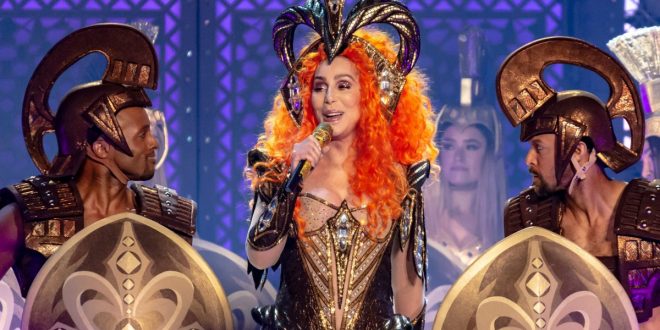 In her career of almost 60 years Cher as a solo artist has sold 100 million records worldwide, making her one of the best-selling music artist of all time as well as being one of the few artist to win three of four major American Entertainment Awards Emmy, Grammy, and Oscar, not to mention the other numerous honorary awards Cher has received through out her career including her Hollywood Walk of Fame star she shares with the late Sonny Bono. During one of the many video montages that played through out the show in between Cher’s costume changes there was an interview that played over clips from her famed film career stating “I’ve never really been accepted by singers as a singer, and actors don’t think of me as an actor, I actually succeeded at everything I ever tried, and yet I’m not part of any of the groups.” With that being said alongside her long list of acylates Cher has proven that you don’t need to belong or be accepted by these groups to succeed and with that attitude Cher has proven once again she is still at the top of her game with her Here We Go Again Tour.

Making her grand entrance for the shows opener “Woman’s World” descending down to a sold out Prudential Center in a small gazebo like designed platform embellished in crystals to an elaborate multi-tear Romanesque stage design fit truly for the empress herself, accompanied by her dancers dressed as Roman soldiers Cher then went into another self empowering hit “Strong Enough”.

The 90 minute performance was filled with greatest hits and as expected full of glam that included 8 costume changes featuring some of her most iconic looks. During a heart warming part that Cher dedicated to her Sonny and Cher days she performed the duos famous hit singles ” The Beat Goes On” and I Got You Babe” alongside a large stage screen that played the old live videos of Sonny singing his verses of the songs as Cher sang live. Cher also included in her set “Waterloo”, “SOS”‘ and “Fernando” which are featured on her recent Abba covers album Dancing Queen.

Following with a narrated video clip of Cher performing Elvis Presley’s “Heartbreak Hotel” as “Chelvis”, she then would return to the stage to give a stellar performance of the Marc Cohn cover “Walking In Memphis”. After a cover of Betty Everett’s “The Shoop Shoop Song”( It’s in His Kiss) Cher would once again leave the stage for a costume change during a guitar solo for “Bang Bang”(My Baby Shot Me Down). Returning to perform the Michael Bolton’s cover “I Found Someone” Cher would then go on to sing one of her most iconic songs to date “If I Could Turn back Time” before leaving the stage only to return for her to a thunderous roar from the the near 20,000 fans standing in the sold out arena for her encore of “Believe”.

NewYork Based Photographer. Music Enthusiast with a background in Graphic Design. Whether I'm shooting a live event or just out wondering the streets its about capturing the moment.
Previous MTS Artists Receive 20 International Singer Songwriter Association Awards Finalist Nominations
Next Diving At Dawn release ‘The Humbling of a Good Man’ video