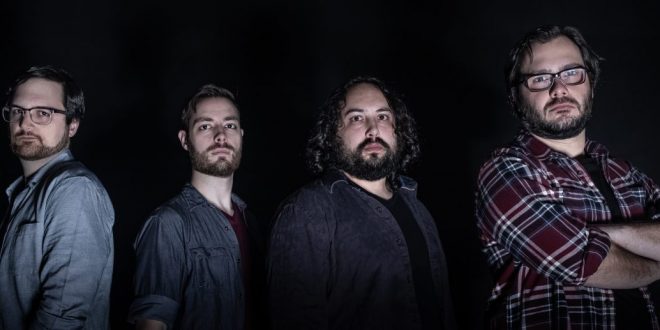 Fans of completely unpredictable progressive metal, lend your ears! Hailing from New York, instrumental quartet Valence is here to feed your need for sweet technicality, masterful melody and outstanding musical genius – wrapped tight and tied with a Sci-Fi bow. Expertly fusing genres like metal, rock, jam, classical, jazz, and more, Valence’s varied yet cohesive influences offer every listener a passport to a new state of mind that is cerebral and emotive, while not sacrificing accessibility.

We play a very eclectic brand of instrumental progressive metal. I like to think that our music has a narrative, almost storytelling quality to it, particularly with how we structure and arrange our songs. The sound is informed by a pretty wide range of genres and influences that obviously includes metal and progressive rock, but also jam bands, jazz fusion, classical, and experimental music of all kinds. Our individual backgrounds and education definitely shine through, with Chris (drums) and WilHelmus.! (bass) bringing their jazz knowledge to the table and Mike and I (guitars) bringing our classical influence to the music.

2. How did the band first come together? Is the band still all original members?

I began playing with Mike and Chris about nine years ago after an invitation from our then-bassist Peter. He and I had gone to college together and contacted me because the three of them were trying out something more progressive than they’d been playing and, knowing I was a sucker for epic prog compositions, enticed me to come jam with promises of writing “an hour-long song.” From there, we wrote our first album Sleepwalker front to back and only broke it up into tracks after writing the whole thing (clocked in at 34 minutes, which while not quite an hour-long song was definitely ambitious for a first record). About a year after I first met Mike and Chris, Peter moved away and we recruited our long-time bassist Ian, who was with us when we recorded Sleepwalker (in a house we rented together) and our EP Laser Baron. Three years ago Ian departed and we met WilHelmus.! who originally was just going to fill in for some big shows we had coming up. The first time we jammed, he asked “do you want to jam over this idea in 17/16?” We had started writing the music that would become our new album, Cognitive Dissidents, and we knew he was the right person to make that material come to life. We are definitely happy he agreed to join us full time and is a key member of the group at this point.

It’s hard to pinpoint one breakout gig, especially considering how (like most bands) we had to slog it out in crappy gigs for a couple years before little by little we were playing better gigs, meeting the right people and finding a real audience. That said, there have been some fairly significant gigs either opening for prominent artists or getter out music to a wider audience. We played two official after parties at The Capitol Theater in Port Chester, NY. The first one was after Clutch and the Sword in early 2014, definitely the biggest audience we’d played to at that point. That time in general was a turning point for us where it seemed we were opening for more established acts like Kayo Dot or Angel Vivaldi. We did a second after party a little over two years ago when Dream Theater played The Capitol Theater, which was an incredible experience as well, especially considering how influential they were to most of us in the band growing up.

4. What does it take for a band to stand out in a music environment such as New York’s?

To stand out in any music scene you need to have quality material and be able to execute that material well live. That should go without saying, but when trying to stand out in a big city like New York, you end up competing with everything else the city has to offer (not to mention a plethora of other metal shows going on the same night). Because of this, it’s important to book and play shows that have good, cohesive line ups, otherwise your fans will stop coming to shows if they think you’re the only act on the bill they’re going to dig. Part of that is being an active participant in the music scene: going to shows, networking with other bands, finding who fits well with you, making friends with people who have similar taste.

5. What should people expect from your live performance when coming to see you perform?

First of all, they should expect it to be loud! Seriously, bring earplugs, Chris is basically Hulk behind the drum kit and the rest of us have to keep up. Also, while we play pretty technical music, don’t expect us to be standing still, looking at our fretboards the whole time. We try to bring a lot of energy to our live show because if we can’t be excited about our music, why should other people?

We all contribute to the songwriting. In fact, there aren’t any songs on the new album that were written by a single member. We all contribute melodies, riffs, suggest approaches, and agree upon song structure when we write new material. WilHelmus.! joined on bass after we had started writing the new album, but even so contributed unique bass lines to the songs we had already fleshed out and was part of the creative process for the other material we had yet to solidify.

First of all, our new album Cognitive Dissidents, which just came out! After that we will be busy putting out more content online and playing lots of shows, staring with our Cognitive Dissidents Tour from April 26 – May 4, going from New York down to Georgia. Our first New York City show after the album release will be at St. Vitus in Brooklyn on May 24 when we open for Black Crown Initiate. Throughout the late spring and early summer we’ll be all over the northeast US: New York, New Jersey, Connecticut, Massachusetts, and hopefully further up into New England as well. We’ll be playing KMA Festival on August 3rd, with more festival and show announcements coming up!

It was either Daydream by Mariah Carey or Kerplunk by Green Day. I was in fourth grade and honestly can’t remember which I bought first, but I stand by both of those early purchases!

Other than things I had been brought to by my parents, the first concert that I personally chose to attend was Joe Satriani and Dream Theater when I was 15 years old. I was just starting to get decent at guitar and get my lead chops going, and being able to see probably my two biggest musical idols onstage was awe inspiring. The best part was right at the beginning of Dream Theater’s set, a couple was leaving and saw my friend Will and I rocking out (our seats were far back, but we were right by the stairs to exit) and offered us their tickets to go up front about seven or eight rows back from the stage. Probably still one of the best concerts I’ve ever been to.

Probably Between the Buried and Me. I loved progressive rock and technical metal, but when I first heard the album Alaska, I heard how music could be modernized and fused with more brutal metal.

Previous The Heavy return with new single “Better As One”, Pre-order new album Sons now
Next The Motet comes to Jersey City on May 23 – Interview with Ryan Jalbert