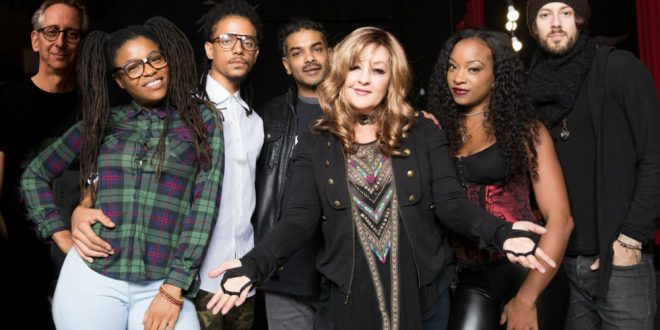 We had such an incredible time in Los Angeles networking with other independent musicians and attending the Indie Artist Summit…such amazing talent in this group of award-recipients.”— Jacqueline Auguste, Across The Board

Jacqueline Auguste and Andy Ramjattan of Across The Board took home three Indie Music Channel Awards at the iconic Grammy Museum in Los Angeles on April 28th, 2019. The Indie Music Channel celebrates independent musicians from all genres across the globe, supporting excellence in recording and performing arts and providing opportunities to showcase and celebrate the unsigned artists and the immense pool of talented musicians on the international music scene. The project was created by Emmy Award-winning media entrepreneur and television host, Christopher Ewing.

Across The Board took home three awards for work on their album “Sonic Boom” including “Best Rock Band”, “Best New Band” and “Best Rock Video” for their song “No Curtain Call”, produced by MC2 Music Media in Toronto.

“We had such an incredible time in Los Angeles networking with other independent musicians and attending the Indie Artist Summit. From a composer who took a rock band, choir and full orchestra and created an epic orchestral album, to a 16 year old pop sensation, to an alternative rocker from India, and an incredible classical producer, who created a collaboration across genres, (there was) such amazing talent in this group of award-recipients.” – Jacqueline Auguste

The “Indie Music Channel” awards is an annual event, held in Los Angeles, and judged by a panel of experts from across the industry–production & engineering, artist management, mainstream radio and television, and grammy-winning artists and producers. http://indiemusicchannel.com

ABOUT ACROSS THE BOARD: Across The Board (ATB) is an award-winning Canadian rock band from Toronto and recipient of the Indie Music Hall of Fame award for hitting #4 on the mainstream iTunes Rock Charts Sept 10, 2018 for their 2018 album “Sonic Boom”. ATB hit the charts running with their newest album “Wild Ones”, debuting at #21 days after release. Having won “Best Rock Song 2018” for the Radio Music Awards, and being nominated for a 2018 Covenant Award for Best Rock Album, Across The Board gas been making musical waves nationally and globally. Formed in 2013, ATB quickly gained popularity with their YouTube cover series “Pick Up and Play” – now with over 600 videos on Youtube—imprinting their unique and innovative musical style and videography on both contemporary and classic rock songs while featuring other local artists as guests. Across The Board received airplay on terrestrial FM and College radio throughout the globe for their last four albums and recently released their fifth studio album “Wild Ones” March 15, 2019 to a packed house at Toronto’s iconic Opera House.

With a rapidly growing and solid social media footprint across the platforms, and a busy local touring schedule, Across The Board is a hard-working, unrelentingly creative force on the Canadian music scene and making marks globally online – selling out shows in and around Toronto, and continuously putting out quality audio and video content. ATB also collaborates regularly with other local and national musicians on projects such as “Indigal”- the Canadian Independent Female Artist Collective, “She’s Listening” in support of Ovarian Cancer Canada, and other local collaborations on the vibrant Canadian indie music scene.

Across The Board “Wild Ones” lyric video

Previous Interview: Rilan
Next Drake Jensen releases Talk Me Down