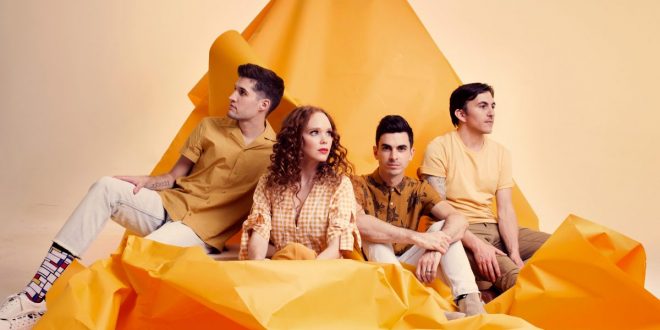 This time last year, indie pop alternative band Royal Teeth were contemplating a comeback. Internally conflicted but sonically inspired, they built a fresh sounding, amplified catalogue of new tunes that externalized their emotions in a way that anyone who’s experienced a crossroad in their life, whether that be in internally or socially, can relate to.

Their three previous singles boast an undeniable positivity. “Never Gonna Quit”, which featured Ellen DeGeneres’ favorite viral sensation Valerie Sassyfrass in the music video, was a summer comeback hit. “It’s Just The Start” and “Show You What I Can Do” featuring Tunde Olaniran, followed suit over the year, both loaded to the brim with energy, mixing elements of rock and electronica.

Now, Royal Teeth take a more vulnerable, toned-down approach for the ballad “Rivalry.” According to lead singer Gary Larsen,“[the song] is about moving on. I was stuck in a rut, mentally. I needed to keep moving forward but didn’t know how. The first few steps into the unknown are always the hardest for me, but I learned to find power in acceptance and take back control of my life.”

“Rivalry” premiered by way of Billboard, in an exclusive interview with journalist Gary Graff, where Larsen further explained that, “the love I reference in the song is my relationship to my life as a musician. [It’s] sort of this internal battle when there’s days when I think, ‘Is this really worth it? This is a lot of stress, and we’re really struggling to make a living out of this.’ I’m kind of an insecure person, and even living life as a musician comes with its challenges because everything I do is vulnerable and judged by others. All these things I deal with on a daily basis, but at the same time there’s positives I find through being a musician. So it’s that battle: ‘Is this worth it?’ and ‘Without this, what am I’ and the search for finding your way.”

While the band has been carefully plotting their next moves and keeping fans on edge with their string of releases over the last year, they have hinted that a full-length album is coming very soon. In the meantime, this weekend Royal Teeth perform at the Jazz & Heritage Festival in New Orleans before hitting the road for multiple dates with indie pop band Smallpools.