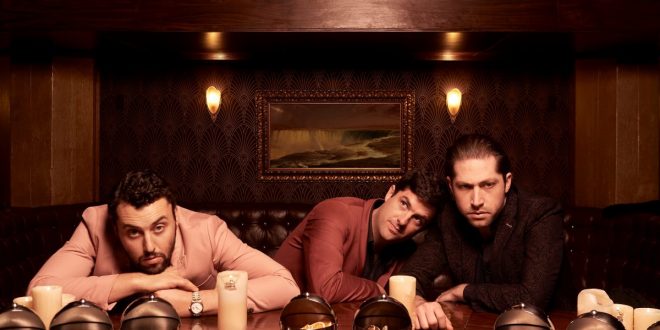 Lead singer Michael Shuman says of the track, “Sometimes in life we forget to be ourselves and really let loose. I live my life inspired by two people: Sigmund Freud and Gary Numan. Both adopting the grand idea of the ‘Pleasure Principle’. Our new track “Bad Things (That Make You Feel Good)” is the musical and lyrical marriage of the two greats.”

The band recently announced their forthcoming album Guy Walks Into A Bar… which will be released July 26, 2019 on Fiction Records. Pre-order the album HERE.

Mini Mansions will embark on U.S. tour this Spring that will kick off at Brooklyn’s Music Hall of Williamsburg on May 30 and take them to U.S. cities including DC, Philadelphia, Boston, Chicago, Los Angeles, and more. All dates can be found below. Tickets can be found on the band’s website.

Mini Mansions are the type of gang whose charm lies in their individual idiosyncrasies. A trio of partners-in-crime, best friends and brothers in all but blood, Michael Shuman, Zach Dawes and Tyler Parkford’s unique personalities are reflected in their third forthcoming album Guy Walks Into A Bar… The album was recorded at Barefoot Studios in Los Angeles in 2018. While all three bandmates are occupied with other gigs (notably Dawes plays in The Last Shadow Puppets, Parkford in Arctic Monkeys and Shuman plays bass in Queens Of The Stone Age, Mini Mansions is their priority. And, for this album, Shuman relinquished his role as drummer for the first time. Drumming come courtesy of his QotSA bandmate Jon Theodore.