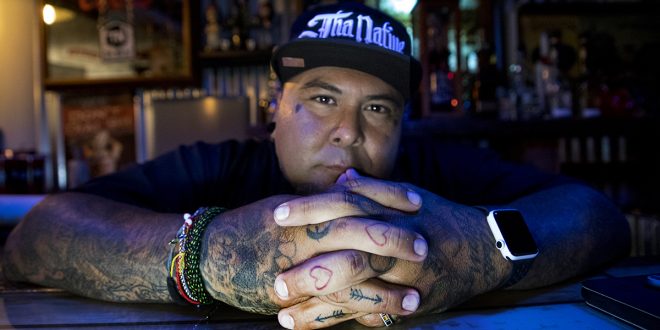 Tha Native, formally known as Short Dawg Tha Native, is a Native American hip-hop artist from the San Manuel Band of Mission Indians in Highland, CA. The San Manuel band is, “made up of the Yuhaviatam clan of Serrano people, who have traditionally lived in the San Bernardino Mountains. (wikipedia)”. In addition to performing live at hip-hop shows around the US and Canada, Tha Native does cultural presentation and can also be found performing as a bird singer at pow wows and other cultural events. If you are not familiar with this style of singing, it is a style of singing done by southwest tribes.

Tha Native has previously released two full hip-hop albums and several singles over the years, which can all be found on iTunes. In the last couple years he has performed at a number of pro-cannabis music festivals as well as other festivals like the Vans Warped Tour, West Coast Summer Fest, Dabathon, and Kushstock, performing alongside some of the biggest names in hip-hop. In addition, he opened for West Coast hip-hop icon, E-40, during E-40’s On One Tour in 2017 and at his 2018 The Gift of Gab Tour. At some point Tha Native and E-40 decided to collaborate on the new single, Go Get Your Paypah featuring the very talented female vocalist, Loomis. Check out the video and let Tha Native know what you think.

Stephen Vicino is the founder of MusicExistence.com. He created this site to give talented musicians a voice and a way to be discovered.
@@svicino
Previous Gallery: Suede at the Albert Hall Manchester 20.04.2019
Next Exclusive Premiere: Spencer Ludwig – Diamonds and Pearls (Prince cover)