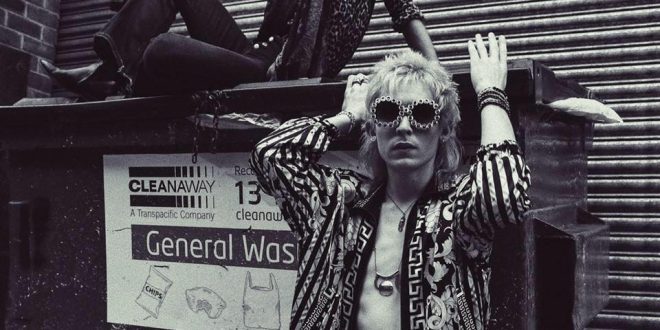 KAATO is a hard rock band comprising vocalist Kurt Lowney, guitarist Hunter Lovan, bassist Mika Nuutinen, and drummer Christopher Williams. Formed in 2011, the Australian-bred quartet would spend half a decade before breaking through, co-headlining with Mitch Malloy after the release of their 2016 eponymous sophomore album. As of last year, Lowney and Nuutinen found a permanent home in Nashville, Tennessee, where the band’s style thrives. Their latest album, Slam!, would follow in late March of this year.

Off their recent release comes “Somebody, Someday,” which currently serves as the album’s representative single. There’s a real glam-tinged, throwback vibe about the song, and the combined shimmer emitted from the piano and guitars works to its benefit. Lowney’s tonality exhibits decent range, while also blending into the instrumental involvement even with its commanding presence. Considered in its entirety, the song is the best encapsulation on the album of mid-to-late 80s Los Angeles-sounding rock, with distinct Aussie swagger piecing it all together. I appreciate how authentically the band channels the era – from the outright characteristics of the vocals, harmonies, guitar crunch and percussion, to the subtly precise touch of reverb, and, of course, added cowbell for good measure.

I come from a family who is passionate about all things music. I learned to sing at an early age, and by 13, had my very own Fender Strat guitar. I tried my hardest at learning all that I could. Because I was born with cerebral palsy, I had to teach myself an adaptive playing style. I learned to write and record my own music, despite these difficulties. In college, I started making great use of my writing abilities by reviewing music, as well as copy editing. I guess it's best to stick with what you know, while welcoming a fair challenge at the same time.
Previous Frank Iero announces west coast dates – ‘Barriers’ out May 31st
Next Live Review: Hollywood Undead at Refinery Gallery in Bratislava, Slovakia 04.17.19