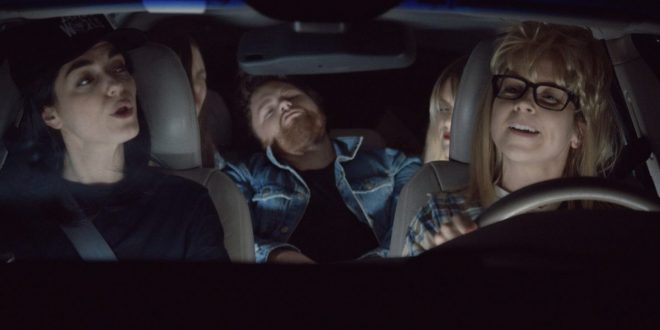 Laura Jane Grace & the Devouring Mothers are currently wrapping up a North American headline tour with supports Mercy Union and Control Top that will visit the east coast and parts of the south through April 28. A full listing of U.S. dates, along with a recently announced set of Australian appearances, can be found below and tickets can be purchased via the Bloodshot Records website HERE.

An album that has received praise from The Associated Press, NPR, Rolling Stone, The New York Times, Billboard, Paste, Brooklyn Vegan and many more, Bought to Rot is a record scorched with honesty across its 14 tracks, unapologetically confessional, capturing many moments snipped from Grace’s life and stitched together in song. As a complete body of work, the album stands as the most musically diverse collection of songs Grace has written to date, and is what she affectionately calls her “Scorpio” record – redolent in sex, drugs, and rock ’n’ roll.

Laura Jane Grace & the Devouring Mothers are Laura Jane Grace, Atom Willard, and Marc Jacob Hudson. Grace is a musician, author, and activist best known as the founder, lead singer, songwriter, and guitarist of the punk rock band Against Me! Willard, also of Against Me!, is a drummer who has played in iconic punk bands such as Rocket from the Crypt, Social Distortion, and The Offspring. Devouring Mothers bassist Hudson is a recordist and mixer at Rancho Recordo, a recording studio and creative space in the woods of Michigan, and the sound engineer for Against Me!

Bought to Rot was written largely in motion – on tour, in Spain, Australia, Amsterdam hotel rooms, and some at home in Chicago. Although it’s a step and a twist away from Against Me!’s sonic blueprint, there’s still a kinetic punk energy that vibrates throughout as well as a refreshing sense of variety presented through a vast array of musical textures and lyrics that read like separate short stories. “My approach musically to the record was that I wanted it to feel like a mixtape,” Grace recently told Rolling Stone. “Like OK, you’ve got this Nirvana-like song, you’ve got a Cure song. It was musically freeing, in that way, to just be playing whatever was coming to me as I was writing and not having to think about it.”

In this spirit, the album spans a generous host of topics detailing Grace’s fractured relationship with her adopted hometown (“I Hate Chicago”), a tongue-in-cheek centerpiece to the album that has become a bit of a live favorite to Chicagoans and non-locals alike, the act of interpersonal acceptance (“The Friendship Song”), all-consuming affection until our ultimate demise [“Apocalypse Now (& Later)”], complicated romance (“The Airplane Song”), and reconciling everything in the end.

Written and recorded at a breakneck pace, Bought to Rot is an album propelled by a sense of restless, forward motion and the inherent need for Grace to continue evolving as an artist and person the only way she knows how. “I don’t want to write about these same things anymore,” she continues. “I need some new sources of inspiration. And I don’t want to be negative. I want to write some positive, happy songs, and I wanted that to be inspired by positive, happy living, too.”

Laura Jane Grace & the Devouring Mothers will be making the following appearances this month. Dates below with tickets available HERE.

Previous Victor Pedro – “Call Me, I Miss Ya!”
Next Frank Iero announces west coast dates – ‘Barriers’ out May 31st