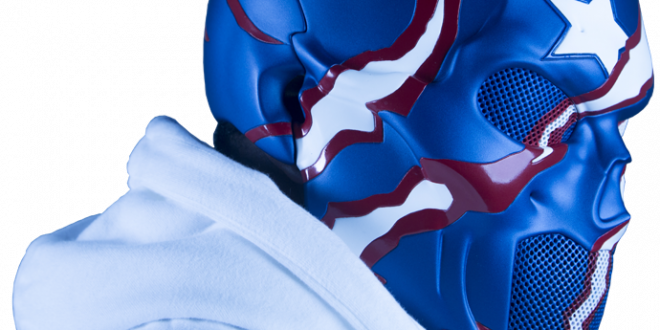 Back in 2017, Texas-based DRussell America gained buzz on SoundCloud for his single, “We Up,” done in collaboration with acclaimed and fellow Dallasite rapper Trai’D. Russell’s distinct image concept would be handled by Jose Fernandez of Marvel-affiliated Iron Horse Studios, who designed a complementary red white and blue mask for him. By late 2018, Russell’s video for “Reminiscing” (the lead track on his debut album, Fuck Tomorrow) was shared on WorldstarHipHop’s YouTube site, giving him an especial boost of visibility as well as subsequent media attention.

On the surface, “Reminiscing,” both as a song and video, seems simply blunt in its presentation, with Russell’s tonality, beat, and visuals coming off as forceful to the senses. However, I can recognize and admire the ‘anti-everything’ approach he channels in live performance, as a means of applying it to this setting. Should that be the case, the mixing of the song is intentionally loud and muddied, while the video’s framerate and color palette similarly veer from being conventionally cinematic.

The general experience, though, is immersive nonetheless. I understood its thematic leaning – a kind of expedited lapse expressing the shift from idyllic childhood to bleak adulthood, subsequently played back as a hazy recollection. From the music’s stylistic standpoint, the song does – even if gradually – reveal itself to have interesting synth-filled elements, and the catchiness of the beat’s pacing is still present. In fact, further singles on Russell’s album demonstrate that he is a not only competent but respectable hip-hop artist. The very notion of his starting with, as well as choosing to push, an anti-single of sorts, is indicative of his striving to take risks in a largely plethoric industry.

I come from a family who is passionate about all things music. I learned to sing at an early age, and by 13, had my very own Fender Strat guitar. I tried my hardest at learning all that I could. Because I was born with cerebral palsy, I had to teach myself an adaptive playing style. I learned to write and record my own music, despite these difficulties. In college, I started making great use of my writing abilities by reviewing music, as well as copy editing. I guess it's best to stick with what you know, while welcoming a fair challenge at the same time.
Previous Gallery: Don Broco at the Worcester Palladium 4/14/19
Next Victor Pedro – “Call Me, I Miss Ya!”