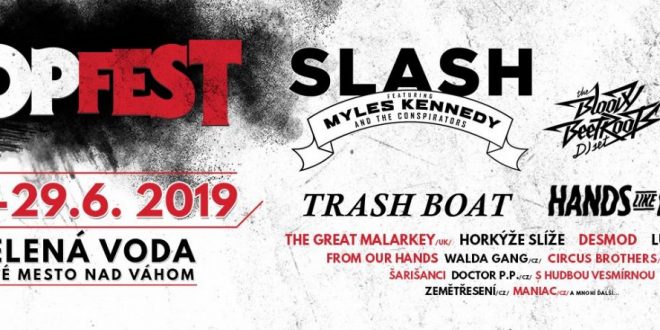 TOPFEST announces another foreign headliner: The legendary British band Apollo 440 will perform at the festival, launching its big hit “Stop The Rock”. Trash Boat will also come from the UK to TOPFEST, bringing their melodic hardcore. One of Slovak best festivals will be held on its home scene again – in the Zelená voda area in Nove Mesto nad Vahom. At the 16th year of TOPFEST, June 28-29 will be played by Slash featuring Myles Kennedy and The Conspirators and bands Horkýže Slíže, Great Malarkey, Desmod, Zemětřesení, FromOurHands Lukáš Adamec, Arzén, Doctor P.P. or TheCircusBrothers.

Apolllo440 is the star of the electronic scene, its work moves on the edge of rock and electronic big beat. The band has become famous especially for the “Stop TheRock” hit of 60 seconds movie.

“We are looking forward to TOPFEST. We’ll play the songs that make up our 28-year career. We don’t miss “Stop TheRock” “Ain’tTalkin ” Bout Dub”, “Krupa”, but also the motifs from “Lost In Space” and “Charlie’sAngels”. Everything in the spirit of the motto: more rock, more dance! ”TrevorGrey plans.

Apollo 440 was created in 1990, has released five studio albums and their compositions are part of many film soundtracks. They released 11 singles that reached the Top 40 in the UK. In addition to their own production, the band is also remixing U2, EnnioMorricone, JimmyPaga, PuffDaddy, and ManicStreeetPreachers.

“Live performances are our greatest satisfaction, we enjoy communication and connection with the audience. The concerts this year are an opportunity to try out new ideas while we finish a new album at the end of the year, “says Noko.

Trash Boat from Britain will also play their melodic hardcore with a reference to the bands of the 1990s. Tobi Duncan, Dann Bostock, Ryan Hyslop, James Grayson and Oakley Moffatt will come to Zelena voda. The guys will also play songs from the latest album “CrownShyness”.

“This album has changed me, my anxiety, my family, responsibility, past, future. We spent a lot of time on it and now we’ll play it live for you, ” says singer of Trash Boat Tobi Duncan.