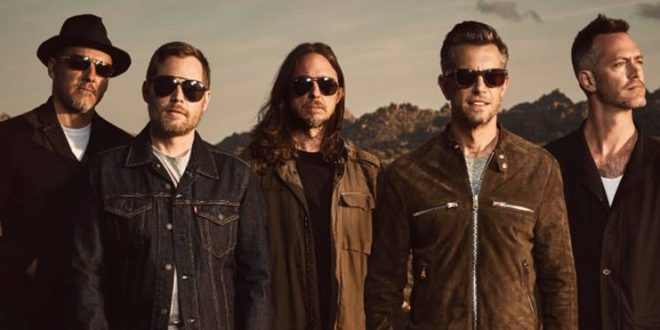 Both “Good Feeling” and “Don’t You Worry” are available as instant downloads by clicking HERE to pre-order VOYAGER ahead of its June 28th release. In addition, everyone who pre-orders the album is automatically eligible to win numerous 311 prizes, including concert tickets, meet & greet passes, handwritten lyrics, autographed goods, etc.

VOYAGER is the second consecutive 311 album to feature production work by both Feldmann and Ralston following 2017’s Mosaic, which entered The Billboard 200 at No. 6, making it the band’s 10thstraight Top 10 album.

About naming the album VOYAGER, 311 vocalist/guitarist Nick Hexum says, “Our albums have become almost like a captain’s log documenting our band’s ongoing voyage through musical styles, while also capturing our feelings and life experiences. With each album, 311 continues to voyage, explore and push our musicality into new dimensions.”

“Good Feeling”
“The song title says it all – being about the best stuff in life; celebrating joy with loved ones. This song is an antidote to all the fear, anger, and division so prevalent in society today. Musically the song is equally influenced by the pounding rhythms that SA and I discovered when exploring the dancehall street scenes in Jamaica, as well as Paul Simon’s world beat records like Graceland and Rhythm of the Saints. This song is a three-minute party jam meant to feel like a vacation.”

“Don’t You Worry”
“We all go through highs and lows. And lows can often lead to confusion, despair and loneliness. Don’t You Worry is about how a friend should react when we sense someone is going through a hard time: ‘Don’t You Worry, you can count on me to help you through your dark hours.’  It’s a song validating personal connection and leaning on one another to turn things for the better.”

311 have also revealed VOYAGER’s cover art, which was created by UK artist Sam Williams of MagicTorch – click HERE to view.

As with every 311 album, VOYAGER features 311’s unique hybrid sound of rock, reggae, pop, hip hop and funk that the band have come to blend so seamlessly.

“I think this album is very eclectic, from simple songs to wild studio adventures that get into weird, stoney outer-space material,” says Hexum. “It’s another step forward for us and we love the adventure, love the journey, love the process and we can’t wait for people to hear it.”

Along with a setlist packed with classic hits and fan favorites, 311 will be playing select tracks from the new album on their upcoming Summer Tour 2019, a 34-date amphitheater tour that will feature Dirty Heads and special guests The Interrupters, Dreamers and Bikini Trill. All shows are now on sale. See tour dates below.

311’s feature film – Enlarged to Show Detail 3, was in 240 cinemas nationwide for a one-night showing on 311 DAY (March 11). Over 16,000+ fans turned out to watch the film, which was largely focused on the band and fan relationship with live show footage and behind the scenes content. The special LA screening with the band took place at the Egyptian Theater on Hollywood Blvd.

Don’t miss your chance to see 311 live – tour dates are as follows: