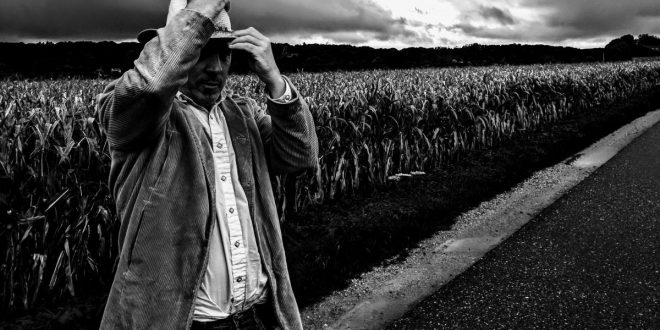 Jeffrey Halford and the Healers

Jeffrey Halford and the Healers’ “Deeper Than Hell” is a ghostly western Americana track. It’s a distant relative to “Ghost Riders in the Sky,” in fact. When it plays, you might just imagine images of Gary Cooper or John Wayne. Maybe Sam Pekinpah is somewhere lounging in a director’s chair.

The song rolls to a Johnny Cash-ish groove. Halford sometimes sounds like Mike (Social Distortion) Ness’s updating of Cash’s sound. Halford sings with a far smoother voice, however. Ness was drawn to Johnny Cash because outlaw country singers shared much in common with punk rockers. Outlaws did what right, not what looked all peachy keen to record companies. Similarly, punk rock was a strike against the equally stale, late 70s rock scene. However, Halford’s sound somewhat predates both of these movements. This song sometimes sounds like those old cowboy songs Marty Robbins used to sing so well. Needless to say, though, this song doesn’t sound much like what’s on the radio today.

Once upon a time, a song like this one might have gone straight to mainstream country radio. Not the mainstream radio of today, however. Mainstream country fans wouldn’t even know what to do with it. They’d probably label it too country, which is a terrible misnomer for any truly country recording. Today’s country music is actually yesterday’s warmed-over classic rock, since modern radio isn’t playing much that sounds like classic rock these days.

Lyrically, the song plays upon age old imagery, like the burning flames of hades referenced in the chorus. It’s been said hell is as low as a person can go. One of the meanest things anyone can say to somebody else is, ‘Go to hell!’ What you are, like the character in this song, deeper than hell? Just how bottomed out does a guy need to get to say he’s this down low?

“I’ve got a premonition this might not end well,” Halford states at one point. Based upon the imagery, and the tone of his voice, you best believe him. Although the song is twangy, cowboy stuff, the groove is a bit of a shuffle. It doesn’t just drag on like, say, “Knockin’ On Heaven’s Door.” This particular track may remind you of when Brian Setzer (of Stray Cats) tried something similar for one of his solo albums. One song, in particular, comes to mind. “The Knife Feels Like Justice.” Maybe not so much because of the song’s rhythm, but due to the smoothness in Setzer’s voice.

Yes, it’s likely a lot of different influences went into the creation of “Deeper Than Hell.” That matters not, though, because the result is something tasty. Music does have the power to heal, as the name of Halford’s band suggests. A good song like this one also has the properties to cleanse the palate. When a trap song like “Old Town Road by Lil Nas X gets confused with actual country music, it’s obvious country music is a genre in trouble. A quality song like this one, though, can make you forget all that for three minutes or so. So, let the cleansing begin.

Stephen Vicino is the founder of MusicExistence.com. He created this site to give talented musicians a voice and a way to be discovered.
@@svicino
Previous Interview: Paralandra – On Tour with Yngwie Malmsteen
Next The Magnetic South Release New LP