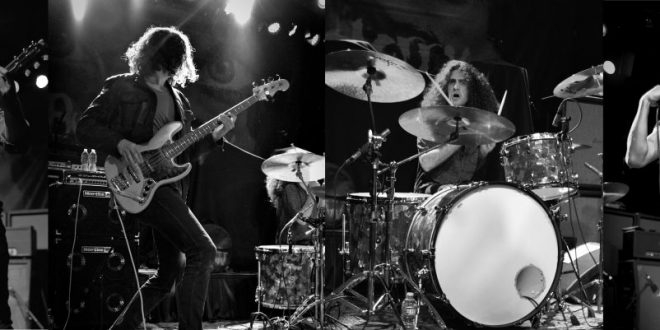 SoCal rock band Joyous Wolf is currently on the Warpaint Tour in support of Buckcherry. On Friday the 29th, they had a stop in New York City’s Irving Plaza and I was glad to see the guys once again. Joyous Wolf is always a pleasure to watch perform live, the amount of talent and raw energy these musicians possess needs to be appreciated in person. The passion that emanates from each of the members is as palpable as it is contagious.

Frontman Nick Reese, while battling the flu, still managed to put on an amazingly solid performance. Powerful vocals combined with tireless dance moves, the man knows how to work the crowd and reels them in to match his level of vigor.

Reese creates these epic moments that bring rock’n’roll to your face and you just keep asking for more. At one point he parted the crowd and dove into the mass of people to give them an up-close-and-personal demonstration of his dance moves.

His bandmates, bassist Greg Braccio, drummer Robert Sodaro, and guitarist Blake Allard are all just as fervent in their craft. Once the stage lights shine on Joyous Wolf, you can tell that this thing we call music is what these guys were meant to do. The emotions reflected in their faces show the deep connection they have to the music they make.

To learn more about Joyous Wolf make sure to check them out at the links below: