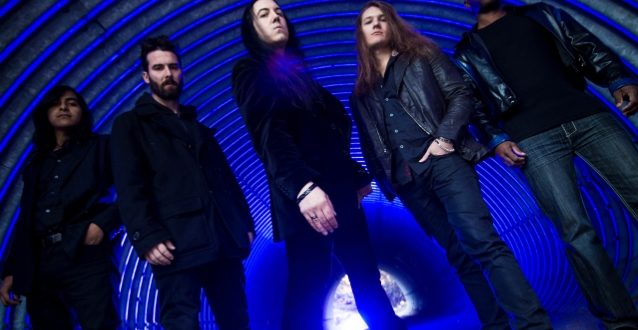 California’s Witherfall has established themselves as a masterfully enduring force of modern prog metal. Based in Los Angeles, the quartet’s somber lyrical perspective and melodic emphasis ring especially poignant in their half-a-decade career. Their first two full-length releases – 2017’s self-released Nocturnes and Requiems and 2018’s Century Media Records effort A Prelude to Sorrow – serve as tributes to founding drummer Adam Paul Sagan, who passed away from cancer before their live debut. Currently, the band’s latest release is an offshoot acoustic EP named after one of that album’s representative songs, Vintage, which dropped this year in late March.

Guitarist Jake Dreyer and frontman Joseph Michael were open to discussing the band’s significance pertaining to their formative development, as well as their current happenings. They are on a European unplugged tour in support of Sonata Arctica, which, for them, has proven a rewarding experience. “We’re all huge fans of acoustic music and of music in general, and we’re lucky enough to have such great musicians as part of our lineup,” says Dreyer, remarking that the band’s recent shows have been some of the best. “[Playing live] is one of the main reasons we’re here,” he adds. “Yeah, the touring aspect isn’t the easiest thing,” Michael admits, “but it has its moments of a lot of fun, and being on stage is the best part!”

For Dreyer, the gamut of his formative influences was often straightforward, yet varied, much like what he channels today. “In the beginning, it was hard rock like AC/DC, Guns N’ Roses, and some of those thrash bands. What really did it for me, though, was hearing Yngwie Malmsteen when I was 14. That moment changed me into wanting to take my musicianship seriously. I got into a lot of other artists on Shrapnel Records, and eventually, classical music. And Queen – Queen was another big influence on me.” Similarly, Michael’s Guns N’ Roses-based stylistic foundation was also catalyzed by prog rock. “I just wanted to be a guitar player back then, but once I heard Dream Theater’s Awake, I was like, ‘Oh my God, I wanna form a band like that – where everyone is just—,’” he ponders for a moment,”’—insane, you know?’”

To a large extent, the heart of Witherfall’s identity is instinctively tied to Adam Paul Sagan, as evidenced by what occurred during their very first show. “After he passed away, I think Jake had been on tour with Iced Earth,” recalls Michael. “His brothers put together a memorial night over in Minnesota, and I think our [Facebook] timeline has been littered with the remnants of tributes to Adam in different ways,” he laughs. “When we’d played our first show ever,” Michael continues, “his brothers were there on the [70,000 Tons of Metal] cruise and they smuggled his ashes onto the ship. We were like, ‘Please let us spread his ashes, so at least a part of him is here with us.”

Going into the process behind the band’s Vintage EP, Dreyer first provided insight into how their tribute to Sagan had expanded, before highlighting the EP’s musical distinctiveness.

“The song ‘Vintage’ in general is huge, and the title of the last record even has his initials, APS: A Prelude to Sorrow – Adam Paul Sagan.” “For the EP,” he continues, “that idea was brought to us by Philip Schulte of Century Media, since we’re doing the acoustic tour with Sonata Arctica. He was like, ‘Hey, would you wanna do this?’ and we were like, ‘Yeah, it’d be a fun little thing.’ There’s an alternate version of ‘Ode to Despair,’ and a part of the Vintage medley that includes ‘Nobody Sleeps Here.’ We also had this percussion player on the record, James (‘Timbali’) Cornwell, who’s played with Earth, Wind & Fire, Janet Jackson – the list goes on. What he ends up adding to the music, I think, is very different than what people into this genre would expect.”

When it came to the production of the EP, Michael states that the band has always held certain pride in initializing that step. “We always produce the music ourselves and then hand it off to a mixing engineer. We don’t want anyone else present in between the writing, arranging, and the final product. In terms of mixing, Chris ‘Zeus’ Harris polishes the music so well. He knows what we want, and we love working with him. It’s tough, though, because you want to be creative, but you also don’t want to get into creative scuffles. I dunno, I’m really timid about that (laughs).”

Once I mentioned the band’s cover of Tom Petty’s “Won’t Back Down” (the penultimate track on Vintage), I’d somehow spontaneously compared that move to black metal artist Burzum covering a Janet Jackson song. Luckily, Dreyer and Michael caught on. “That would be pretty cool to listen to,” laughs Michael, Dreyer subsequently namedropping the Jackson hit “Black Cat” as a possibility. “When we did ‘Won’t Back Down,’” Dreyer continues, “we were doing pre-production for the song ‘Shadows,’ and just messing around with doing a cover in between, because we’re huge Tom Petty fans. So, we thought, ‘How about we arrange some of this harmony so it’s a bit darker sounding, drop the tempo, make it very moody – and there you go. We hauled it out. Oh yeah, and Joseph refuses to sing the word ‘baby’ (laughs).”

Upon asking whether this EP was, in essence, a continuation or a standalone release, the two seemed undecided. “That’s a good question,” ponders Michael. “Yeah, that is a good question, ‘cause I can’t really think of an answer,” Dreyer laughs. “I mean, it wasn’t part of the plan; it was just kind of brought to us. I guess ‘Nocturnes’ is its own record, ‘Prelude’ is its own record, and this EP is kind of an expansion pack.”

Continuing on the aspect of the band’s free rein, both Dreyer and Michael agree about its positive effect on their journey as a whole. “It felt super natural—” “—literally supernatural,” Michael laughingly interjects. “Preparing for this tour was the same way,” Dreyer continues, “because like I’d mentioned earlier, we love acoustic music. The percussionist we’re touring with now, he’s into hip hop. But we just love all kinds of music; doesn’t matter what it is, as long as it’s good.”

As our chat came to a close, Dreyer humorously summed up the importance of their fanbase. “We love our fans, and we love hearing from fans, so we’d like to thank our fans – as almost every band says. We wouldn’t be here without you guys. But hey, look out for Witherfall in the fall!”

I come from a family who is passionate about all things music. I learned to sing at an early age, and by 13, had my very own Fender Strat guitar. I tried my hardest at learning all that I could. Because I was born with cerebral palsy, I had to teach myself an adaptive playing style. I learned to write and record my own music, despite these difficulties. In college, I started making great use of my writing abilities by reviewing music, as well as copy editing. I guess it's best to stick with what you know, while welcoming a fair challenge at the same time.
Previous Album Review: Periphery – Periphery IV: Hail Stan
Next LA Metalcore Band Matriarchs Unleash Mosh-Worthy Single “Roots”