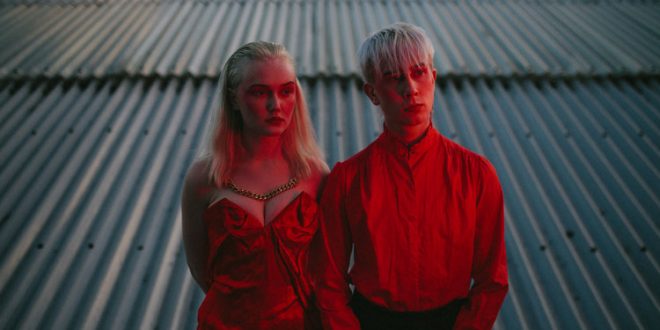 The Ninth Wave debut music video for “Used to be Yours”

Today, The Ninth Wave reveal the video for ‘Used To Be Yours’, the latest single to be lifted from their forthcoming debut album Infancy. Premiered via Noisey, they write that “The Ninth Wave’s sound is a brilliant, bleak mixture of 80s rock bands like The Cure and Sonic Youth, but with a synth pop sheen – the kind of thing you might listen to while smoking in the bath and ruminating over past lovers if you were feeling particularly dramatic.”

Shot by David East, the awe-inspiring new visual documents the fallout of the breakdown of a relationship, reflecting the track’s theme of finding your own way after losing love. “The song is set in the No Man’s Land that you find yourself in after a relationship ends, where you still feel like you have some sort of possession over each other,” says bassist / vocalist Millie Kidd. “It reflects upon the inability to find comfort in one’s own company.”

Speaking about the video, the band say: “The video was all shot in 24 hours in the Peak District, we all stayed together in a cottage that was completely isolated from any towns. We wanted the video to capture that feeling of emptiness that comes after a break up, but also the strength that is possible to find in yourself instead of in another person, even if it might not seem that way at the start.”

“Used To Be Yours” and the album’s lead single “Half Pure” are the band’s first offerings following a massive 2018, which saw them garner support from the likes of BBC Radio 1, The Guardian and NME and gain a spot on Amazing Radio’s list of Tips for 2019. The band sold out a homecoming headline show at Saint Luke’s, Glasgow and recently wrapped up a UK tour with whenyoung, as well as a support slot for CHVRCHES at the SSE Hydro Arena. Shows in New York and SXSW recently preceded a huge European tour alongside The Blinders. With critical acclaim and an impeccable reputation on the live circuit both nailed, it’s only a matter of time before The Ninth Wave permeate the mainstream and cement their position as one of the British music scene’s brightest new prospects.

“Infancy” will be released in 2019 on Distiller Records, including the below tracks. Pre-order here.

Previous Watch the music video for Hatchie’s new song “Stay With Me” now
Next Introducing: DRUIDS – get to know the band, and learn their latest single “The Whip”