Home / Headline News / Introducing: DRUIDS – get to know the band, and learn their latest single “The Whip” 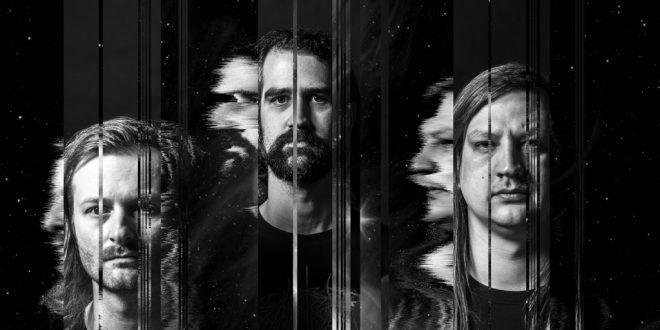 Introducing: DRUIDS – get to know the band, and learn their latest single “The Whip”

Des Moines, Iowa-based psychedelic/stoner metal trio DRUIDS recently announced that their new album, Monument, is scheduled for release on April 19, 2019, via The Company KC. The album is available to pre-order now via Bandcamp, with exclusive multi-colored vinyl also available via The Company KC by clicking HERE.

DRUIDS first laid their destructive groundwork over two releases – Pray for Water and The Sound of Meditation (released in 2009 and 2013, respectively) – continually looking to push their boundaries, physically and sonically. With the release of 2016’s Cycles of Mobeum, the band embarked on a full year of heavy touring all over the United States, giving audiences a heavy, cathartic live show, awash with wailing guitar solos, rhythmic drumming and chunky, grooving bass-lines. They took to the studio in early 2017 to record their follow up, Spirit Compass, with producer Brandon Darner to shape what would be a smoldering follow-up.

As a follow up to last month’s release of their first single, “The Whip,” DRUIDS have revealed a guitar playthrough video for the track. The video is available to view now via Gear Gods:

With their new album Monument due out two weeks from tomorrow, we recently got a chance to send over a few questions to DRUIDS and vocalist/bassist Drew Rauch was kind of to answer our questions, read through our chat now:

How did the band first come together? Is the group still all original members?

The band started back in 2008 with just Luke and Keith. Originally it was just a bass and drums project influenced mainly by High on Fire. Luke moved to guitar, and I started playing bass in 2010 to complete us as a trio. So technically all of the members are original. We have all played in previous bands together, so we all knew each other well.

We were a side project for the first few years. I would say our main “breakout gig” would be in 2016 when we released “Cycles of Mobeum” at our release show in Des Moines. That’s when we started touring a lot and try to get our songs out there.

What does it take for a band to stand out in a music environment such as Des Moines?

For us, it was just playing as many shows as we could at the start. Then once our name got out there, we started just trying to play bigger shows opening for bigger touring bands. Des Moines is a small enough community where most people in the music scene know each other.

We like to play with a lot of energy, headbang, and have a good time!

Luke writes a lot of the riffs. He’s got hundreds of riffs logged on his phone at all times. He does a good amount of songwriting and lyrics. I write a decent amount as well. Our main process is generally Luke brings in some material to me or vice versa, and we jam on it and kind of arrange it to get a skeleton. Then we practice with Keith, and we collectively arrange the songs to how we want them to go.

They should expect a lot of touring around the US. We are releasing our new record “Monument,” and so we will be out there supporting it as much as we can!

Unfortunately for me my first album that I purchased myself was Super Dance Hits 96′. My parents wouldn’t let me buy the “I’ll Be Missing You” single by Puff Daddy, so I panicked. A mistake I’ll have to live with for the rest of my life…

I went to a ton of local shows growing up that started a lot of my musical interest. My first major show that I went to was Blink 182 and Motion City Soundtrack in Milwaukee.

Metallica is probably the most influential to me at a young age. Just the attitude they brought to metal in the early days was a fun way to get into it. Cliff was a big influence to me as a bass player. Playing with my fingers is always my go to at a song and he has a lot to do with that.

Previous The Ninth Wave debut music video for “Used to be Yours”
Next Vampire Weekend drop two new songs, “This Life” and “Unbearably White”