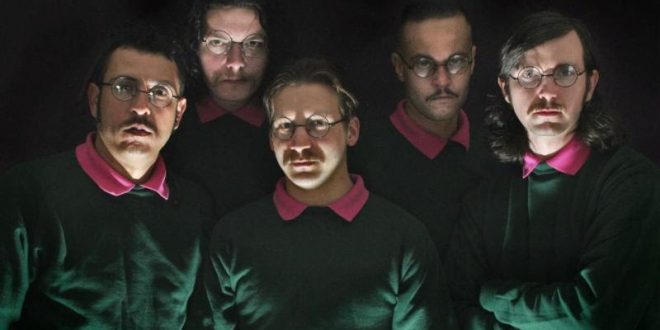 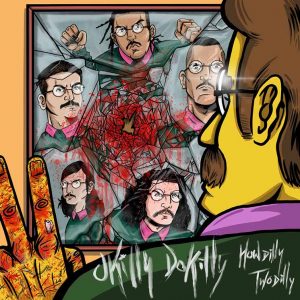 A year after their 2015 formation, Okilly Dokilly became the world’s only “Nedal” act, boasting predominately metal instrumentation with grandiose devotion (via blatant clothing and thematic leanings) to Simpsons character Ned Flanders. Simply hearing about such a concept before then would have initially generated a few off-chance chuckles. However, what began in the spread of a few teaser photos had catalyzed into a fully-fledged touring band, complete with an acclaimed debut album, Howdilly Doodilly. Last Friday, the Phoenix, Arizona-based quintet have since followed up that offering with the much-anticipated – and appropriately titled – Howdilly Twodilly.

To wholly complement the return of Okilly Dokilly, the album opens on familiar turf with “Reneducation.” Serving as the album’s carrier single, that murky and grim, yet upbeat energy has by now become a standard of the band’s sound. Its bolstering of punk-inspired riffs and guttural vocals also fare equally well. A subtlety about the presentation that I could appreciate comes from their retaining the vocal tonality when switching to a midtempo beat, as it seems done for tongue-in-cheek effect. Around the halfway point, there’s some decent chorus-tinged clean guitar gradually leading into a more conventionally accessible sound. The jazzy stylistic shift that follows works at showcasing the band’s range, which is supplemented by clean singing and a generally refreshing pace. The harmonious aspect of the band is put to further use on the second track, “When the Comet Gets here.” Its smooth means by which the vocals blend together creates a type of haunting effect – one that otherwise contrasts from the heaviness of the main riffs. “Murder House,” the third track, answers the former with yet another interesting feel. Its blistering, combinative riff and drum sequence is lifted by a bed of synths that enhance the backdrop, all the while the vocals vary between guttural and clean forms. From a thematic standpoint, the song seems to center around an instance where the mightiest pleas for help go unanswered, and those lives are subsequently lost in swift and painful succession. Amidst the brutality of the subject matter, the uniqueness of the song’s instrumentation is further demonstrated by way of the synth pads gradual enveloping of the guitar riffs. After a hilarious but competently progressive tangent in “I Can’t, It’s A Geo,” “Bulletproof Glass” caps the album’s first side by keeping in step with the violence angle. Whereas the previous songs exhibited a clearer observational perspective of the environment, this one brings the killer’s conscience into question – particularly, whether their wicked ways would directly affect those of close kinship to them. Although more midrange in tone, the band demonstrates a stronger emphasis on melody within the song, as well as leniency of stationary and shrieking screams in the vocals.

The latter half of the album cleans the slate, starting with “Claw My Eyes Out.” I appreciated the relative straightforwardness in its presentation, and the looser guitar tone this time around. Based on how the song advances, it actually holds great potential as a milder complement to the intensity of “Reneducation.” On “Purple Drapes,” the second and last of the album’s shorter tracks, I was pleasantly taken by surprise in terms of my prediction of its structure and its actual turnout. That same element is featured in the slow but involved composition of “Here’s the Noose,” which sees a well-utilized blending of clean vocals and heavy guitars. Its successor, “Murdiddlyurdeler,” exhibits a noticeably different skeleton while coincidentally ending on the same runtime. From there, the lead melodies from that song also make a successful transition into the album’s penultimate long cut, “Wrong God.” I found it to harken back to a 70s hard rock feel reminiscent of Black Sabbath. With the exception of the band’s distinctive guttural screams, it does manage to largely come across as a gem of musical era ambiguity. In experiencing the lighter tone of the closing track, “Folkilly Dokilly,” the album interestingly comes full-circle, expressing its Ned Flanders ode in the most direct and succinct way possible.

Overall, Howdilly Twodilly exemplifies clear stylistic and thematic growth within the band. Each song, in its own way, is multi-dimensional as it is humorously resonant, and both factors are pivotal in representing Okilly Dokilly’s transformation from novelty act into genuine musical messengers. Even with this album coming out so recently, I’m already looking forward to hearing how the band’s creativity will translate in a future full-length setting.

I come from a family who is passionate about all things music. I learned to sing at an early age, and by 13, had my very own Fender Strat guitar. I tried my hardest at learning all that I could. Because I was born with cerebral palsy, I had to teach myself an adaptive playing style. I learned to write and record my own music, despite these difficulties. In college, I started making great use of my writing abilities by reviewing music, as well as copy editing. I guess it's best to stick with what you know, while welcoming a fair challenge at the same time.
Previous Billboard Emerging Artist Richard Lynch Saddles Up With Social Media Single “Keyboard Cowboy”
Next Young Doctors in Love Release 12 tracks