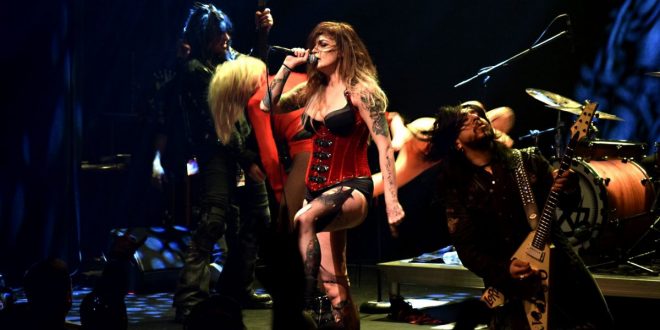 Lords of Acid started their set with vocalist and synth player Praga Khan, guitarist Sin Quirin, drummer Galen Waling, and bassist Dietrich Thrall doing an instrumental intro to amp up the crowd with heavy beats. When Frontwoman Marieke Bresseleers came out, flogger in hand, her strong stage presence demanded all eyes and ears be on her. Her vocal prowess is an unwavering force to be reckoned with.

Likewise, Waling is a complete and utter beast behind the kit. During the entire set, he played with such intensity I was able to appreciate his skills from across the venue where I was sitting in the back.

Quirin and Thrall have an awesome and dynamic balance and feed off each other’s energy. Khan is the glue that holds all the madness together, not missing a beat while hoisting his leg up on a synth.

Throughout the set, Bresseleers invited multiple fans on stage to partake in a little bit of provocative debauchery while doing an impromptu, titillating dance.

Lords of Acid did not hold back on visual aids either, they brought a blowup sex doll that, quite honestly, became my favorite type of crowd surfer ever. Lightweight, no thick shoe soles to hit your face, and no sweaty hair touching you (crowd surfers take note.) All in all, Lords of Acid is a band you have to experience to be able to absorb their fun and audacious performance up close.

To learn more about the Lords of Acid make sure to check them out at the links below: