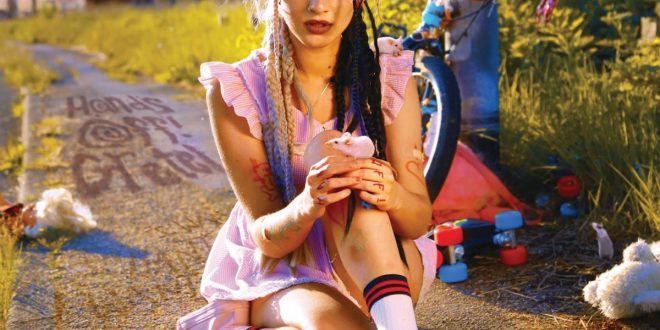 Album Review: Hands Off Gretal – I Want The World

Hands Off Gretal released their new album I Want The World today via Puke Pop Records.

The fiercely independent South Yorkshire rockers preceded I Want The World with the single release of the title track and visual in January – a colorful explosion of grime, grit, and attitude. Drawing inspiration from legends of punk like Hole, The Distillers, and Nirvana, Hands Off Gretal sets a standard of sugar-coated grunge-punk where their fearless misfit frontwoman finds solace in expressing issues with body image, mental health, and celebrity from a feminist perspective.

Recorded at Monnow Valley studio in Wales, new album I Want The World released under Puke Pop Records, Hands Off Gretal’s own record label. It features twelve-tracks – a blend of intense melodic rock and grunge-punk that creeps into uncharted territories of bubblegum pop hooks and amazing vocals. Front woman Lauren Tate dropped out of school at 16 years old to find an outlet to channel her inner despair into – and it clearly sounds like I Want The World is that outlet.

“It feels like I wrote this album 6 years ago in a school toilet whilst skipping class and hiding from the world,” notes Lauren. “The way I felt so ostracized and alone, like I didn’t fit in anywhere. It became my mission to sing for the outcasts, the weird kids, the ones that feel misrepresented in society and left behind like I do. I made it my obligation at 15 to make as much noise as possible as a young woman, to challenge everything.”