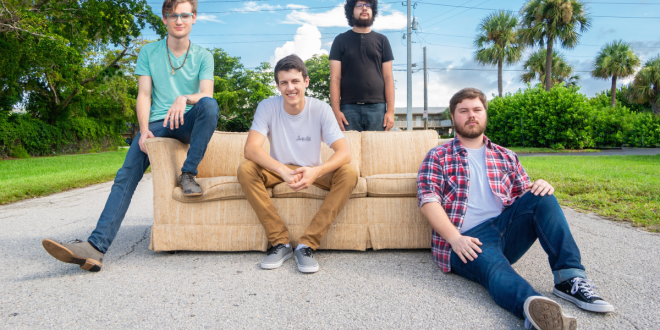 A little bit pop, a little bit alt, Del Pelson’s charming style can’t quite be nailed down. The band’s sound is somehow both laid back and energetic, thanks to the diverse personalities and methods of its four members. Frontman Cal Nelson is a songwriting talent with innate creativity and a unique way of seeing and hearing the world. Garrett Kealer’s drumming ranges with incredible subtleness to virtuosic grooves; Nathaniel Spiner brings melodic, driving bass lines to the frontline, and Patrick Montanari acts as the band’s secret weapon with impressive saxophone skills, foundational keyboard layers, and slick guitar leads. Together, Del Pelson breaks age and gender barriers with its catchy indie-pop melodies and influential alternative rock beats, exploring love, life, and irony with musical undercurrents of jazz, blues, roots, folk, reggae, and surf.

Talking about the song itself, Del Pelson frontman Cal Nelson says; “We’ve been playing the song live now since about the time of our last release; it’s given us time to really fine tune it. We had a lot of fun with it in the recording studio because we knew exactly what we wanted and were able to knock it out in a single day. We even have Heather Lou singing the high part in the last chorus!”

The band is well known for their live chemistry, and their obvious enjoyment is infectious. Del Pelson performed in the 2016 UndertowJam, featuring Young the Giant and Bear Hands. They have since opened for other national acts including Kurt Travis, Brent Walsh, and more. Formed in 2015, Del Pelson has since been featured in 104.3 The Shark’s Open Swim Podcast Series with Erin Lee, Miami New Times, PureHoney Magazine, Soundbite Magazine, York Calling, Mystic Sons, and more.