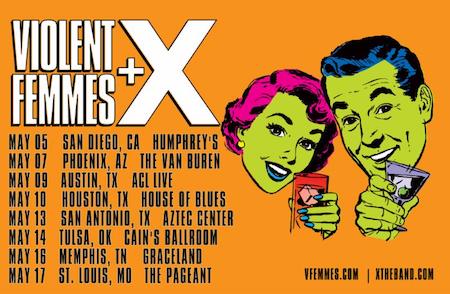 The Violent Femmes have announced a string of tour dates for May, most of which are co-headling dates with legendary Los Angeles punk band X. The Violent Femmes will play shows in Las Vegas and Redondo Beach California before linking up with X for nine dates across the country. The Femmes close out their tour with a show in their home state, Wisconsin.

Among the dates is an appearance at the KABOO Texas festival in Arlington, where the Femmes and X will play among the likes of Kid Rock, Sting, and The Killers.

The tour follows the release of the Violent Femmes 2017 live compilation album 2 Mics & the Truth: Unplugged & Unhinged in America. X recently announced vinyl reissues for their first four albums, beginning February 22 with the release of their seminal 1980 debut Los Angeles.

Tickets can be purchased here.