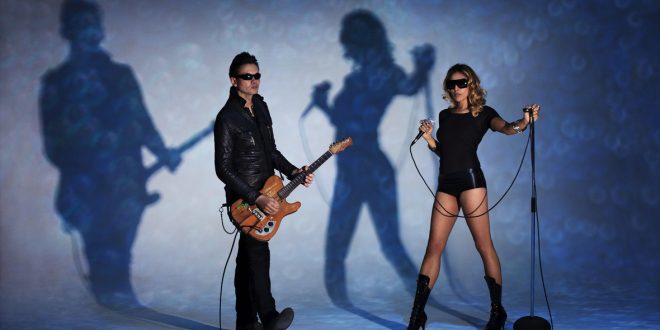 Interview: Will Crewdson of She Made Me Do It

She Made Me Do It is an English rock project based out of London. With singer-bassist Shaheena Dax and guitarist/keyboardist Will Crewdson as its foundation, the duo aims to wholly expand their creative palate. Both members, rooted in their primary band Rachael Stamp, see a continued fostering of dark, grungy guitars with contrastingly bright and vibrant new wave synths. At times, each distinctive element switches dominance from song to song, but through a means that feels naturally unified.

I caught up with Will Crewdson to discuss the current happenings of She Made Me Do It, their formative days in Rachael Stamp and various other acts, as well as the process behind their latest EP, Drenched, which dropped last February.

ME: In recent news, you guys were just confirmed to support Altered Images. That must be fun!

Will: That’s right! I don’t think they’ve played very much and have just normally done festivals. This is quite a big deal for them to do a London gig, and we’re really privileged to be able to support them.

ME: I remember first seeing them on VH1 Classic as a kid, so when I heard that name again, I knew it had to be a special thing.

Will: Right! Yeah, we’ve never seen them live before, but we’ve always loved their songs, so it should be a great night!

ME: You also have shows coming up in the next few months, right?

Will: Yeah, we have a London one next month. Then in May, we move up north to Glasgow, Manchester, Nottingham, and Bournemouth. In June, we’re going to be in Belgium – we’ve never played there before. So yeah, we’re getting around a lot over the next couple months.

ME: Back when you were growing up, what kind of influences helped shape your sound?

Will: I started playing guitar from quite an early age, but the music I’d really gotten into later on was electronic-based. I liked a lot of post-punk and new wave bands like Depeche Mode, Fad Gadget, and Cabaret Voltaire, and I wanted to mix the way I play with electronic sounds. I think we’re a lot more rock-influenced now with She Made Me Do it, but there’s always going to be that bed of electronica underneath.

ME: Speaking of rock, you were in Rachael Stamp back in the 90s. I remember there was a single called “Hey, Hey, Michael, You’re Really Fantastic,” and an album that was recorded but went unreleased. Was that song supposed to be part of that album?

Will: Yeah, it was! The album was recorded, mixed, and mastered in New York for Warner Brothers, and was all ready to go, but the guy who originally signed us left the company. It’s a similar recurring story with a lot of bands – you get signed by one guy, that guy leaves for another label, and then you’re stuck with some other guy who doesn’t understand what you’re about.

The way it turned out was actually a blessing in disguise, because we were able to gain a following after we left the label. We started putting out albums on smaller labels, but we earned more fans by that time. Most of that original album did come out in the form of b-sides, though.

ME: I’d imagine it would be pretty easy to find.

Will: Yeah, if you can find the singles, you’ve already found most of that album.

ME: Did you and Shaheena meet each other in Rachael Stamp, or did you know each other before that?

Will: I met her once she became the keyboard player in the band. We were looking for a keyboard player, and she saw us and liked what we were doing, and it ended up working out really well.

ME: Tell me about the transition into She Made Me Do It. How did that come about?

Will: It kind of harps back to Rachael Stamp a bit, because there was a point where we were starting to write new stuff for the band, and we thought they were too good to go to waste, so we ended up finishing them ourselves. Shaheena wrote most of the lyrics, and we both enjoy collaborating on music, so that’s how it came about, really.

ME: Your new EP, Drenched, has been out. What could you say about the response to it so far?

Will: It’s been really good! I feel like we’ve become harder and more rock-sounding. I think people appreciate that, and it’s the best collection of songs. Even though there’s only four, they’re quite varied and flow together very well. Everyone seems to have a favorite song on it as well, which is good; it’s not like there’s only one standout song.

ME: The single that’s out now, “Bones,” is kind of a heavy song with gothic undertones. How was that song initially created?

Will: Yeah, the guitar sound particularly has a goth feel to it, but we consider it to be more dark than gothic. There’s a dark subject matter as well, having to do with obsession, and almost like a stalker theme. Hopefully, the music reflects where the lyrics are going on that. Shaheena came out with most of that concept initially, and I added in all the bells and whistles, and it all came together that way.

ME: It’s a return to the rock, as you were talking about before. On your first album, there was a greater presence of electronic influences, but this EP has an almost exclusively rock sound.

Will: Yeah, totally! It’s probably mainly because of the way we do It live. When it’d just be the two of us, we’d use synths, backing tracks, drum machines, and stuff like that. But now we have a live drummer, so that has expanded the sound. We’ve just taken that element into the studio and run with it now.

ME: You produced the song, is that right?

ME: Then it was mixed by Nathaniel Chan and mastered by Harvey Burrell. When it came to those guys, did you work with them directly?

Will: With Nathaniel, I worked with him in the past on another band I was in, probably about ten years ago, and I loved the big sound he’d gotten with that material. I just thought he’d be great to do this because previously, with the electronic stuff, I was mixing it all myself. Now, we’re dealing with live drums. Since we wanting to get that big rock sound, he was the first person I thought of. Luckily, he was up for it. He’s in Australia, so we had to send everything to him to see what he’d come up with, and he just came up trumps!

Harvey, we’ve known for years. He’s done our live sound for Rachael Stamp, and for Adam Ant as well. He’s an all-around great engineer and is also great at mastering.

ME: How about a rundown of the three other songs?

Will: “Broken Morning” is more of a love song but having to do with the end of a relationship. Sound-wise, there’s a lot of acoustics going on there, so it’s quite a juxtaposition from the first track. It’s a bit softer but we were really pleased with how that came together. We really like the all the parts in it – the backing vocals, the guitar solo, and all that.

“Ashes,” the next track, is, I think, the most goth we’ve ever sounded (laughs). A lot of fans have been saying the song would sound good in a goth club; hopefully, people will start giving it spins in those clubs. It’s the most electronic sounding on the EP as well. There’s a lot of verses build around that minimal drum machine sound, but then it goes into a rock chorus. We’re really pleased with that.

The last track, “Time,” is a whimsical, pensive track. I think the lyrics to that one are a bit abstract; I’m not really sure, but you’d have to make your own mind up (laughs). We’d just thought it would be a good way to close off the EP.

ME: Having played in many bands, including She Made Me Do It, do you feel like you learn a lot from these experiences?

Will: Absolutely! When I work with one band and return to my own stuff, I definitely take what I learned into the next tour or recording session. I do solo gigs as well, and it all culminates together. Everything helps everything else, basically.

ME: Do you see the themes of these songs expanded into a full-length setting, or would you stick with EPs for now?

Will: The idea is to do a series of EPs this year. I think we’re going to do at least two more. If it works as an album, we might put that out as one. The album might partly comprise some of those songs and new ones as well, or we might do a completely new album. The main thing is to just keep moving forward. We just want to get as much stuff out as frequently as possible.

Will: Come and see us live if you can. Hopefully, we’ll be able to make it to where you are. If you can’t, I’ll just post loads of videos and post them on your feeds!

She Made Me Do It Socials:

I come from a family who is passionate about all things music. I learned to sing at an early age, and by 13, had my very own Fender Strat guitar. I tried my hardest at learning all that I could. Because I was born with cerebral palsy, I had to teach myself an adaptive playing style. I learned to write and record my own music, despite these difficulties. In college, I started making great use of my writing abilities by reviewing music, as well as copy editing. I guess it's best to stick with what you know, while welcoming a fair challenge at the same time.
Previous Andrew Hendryx Impresses With Van Morrison’s “Into The Mystic”
Next Live Nation and SGE Present Rockstar Energy Drink Disrupt Festival