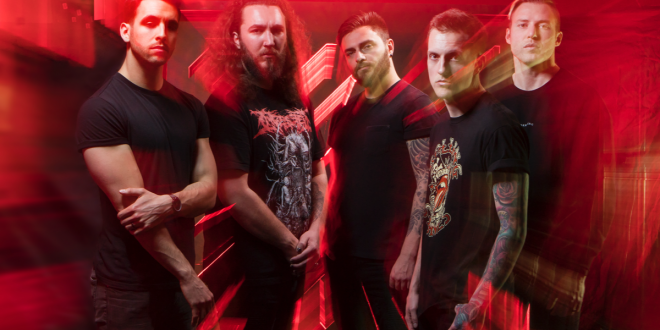 Detroit’s I Prevail have shared the video for the song “Paranoid” from their second full-length Trauma. The record will be released on March 29 through Fearless Records and is available for pre-order in physical and digital formats HERE.

I Prevail will embark on a headline North American tour next month. The first leg of the band’s headline tour kicks off on April 24 and runs through May 24. The second leg launches on July 11 and runs through August 9, and includes several major festival appearances. Joining the band for these dates will be special guests Issues and Justin Stone. Tickets for the tour are available here. All dates are below.

Trauma represents a moment of triumph in the wake of a series of trials and tribulations endured by the Michigan quartet—Brian Burkheiser, Eric Vanlerberghe, Steve Menoian, and Dylan Bowman. Even as they catapulted towards mainstream notoriety with 2016’s breakout Lifelines, they faced unforeseen hardship that might’ve broken any other band. Burkheiser dealt with a debilitating vocal injury that jeopardized his future as a singer. He made it through, but dealt with the aftershocks of stress and anxiety. Conflicted with thoughts of potentially leaving the band, he made a decision. He got together with his band brothers in 2018 and they decided to craft the record they wanted to hear without outside input. Joined by producer Tyler Smith [Falling In Reverse], they emerged from 10 months in the studio with Trauma.

With an equally melodic and momentous offering, I Prevail soar on Trauma. Smarter and more confident, rock music gets the band it needs to carry it to the frontlines of heavy music: I Prevail.

I PREVAIL ON TOUR:
WITH ISSUES + JUSTIN STONE: