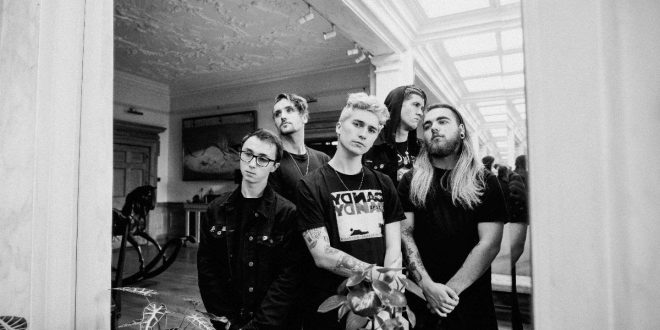 The South Wales quintet fronted by amazingly talented Lucas Woodland have been releasing singles for the past few years and today the world was finally gifted with a full length album, which helped fans see the band from all new angles.

The opening track of the album ‘Perish’, was the second single that the band released during the run up to the release of the album. With angsty lyrics, and crazy drum fills from drummer Ash, it makes the perfect opener. ‘Your Love (Has Ruined My Life)’ is the second track on the album, and my personal favourite. It’s perfect. A powerful, instrumental intro which makes its way to meet Lucas’ soft vocals full of honesty. The chorus hits and we hear the range of the vocals which turn out to be almost breathtaking! 10/10 for the track due to its haunting lyrics such as ‘When I am finally dead, maybe i’ll come back as someone else and after all this pain, I can love you in the end’.

The following two tracks ‘Like a Shadow’ and ‘You Are Everything’ were both released as single before the release, with ‘Like a Shadow’ being the lead single and first released, from the album.

‘Marigold’ is the first time we are shown the calmer side to the bands catalogue, with soft vocals, a piano and vulnerable lyrics on losing love. With the lack of other instruments in the track, Lucas’ voice is is left almost isolated, it isn’t found too often and he pulls off incredibly well!

The two tracks ‘To Fall Asleep’ and ‘Last of the Evening Light’ are two of a few of the heaviest tracks on the album, where we hear Lucas push boundaries with intense screaming that we haven’t heard a lot of in previous tracks before. Stand out lyrics for me are ‘I know that pain may be simply temporary, but when will the daylight come for me?’, which i’m sure many people can relate to. The chugging guitars and complex drumming are major stand outs in these tracks.

Track number 7 ‘Monochrome’ strays from the norm of Holding Absence, while still keeping the fundamentals of HA. The track is bursting with energy and was the final single that the band released as a single prior to the album.

‘A Godsend’ is a track that a lot of Holding Absence fans may recognize it, as they used it as their intro track when playing live for a while including their groundbreaking set at Download Festival 2018.

‘Purge’ will open a lot of peoples eyes of how advanced, complex, talented and simply ballsy that the lads are. The track has much fewer lyrics than other tracks and the song has a very shoe gaze vibe to me, which blends in brilliantly with the vocals and instruments.

Closing track, and the longest track on the album ‘Wilt’ starts very ambient and soft, but don’t let it fool you. The chorus totally RIPS! The powerful singing in the chorus is memorable and the song almost has phases of different vibes and emotions, and can be a roller coaster to listen to. A perfect ending to the album.

Overall, totally honestly, this is the best debut album, that a band has released in many, many years. Throughout the album we are shown the talents from all five member, who all play such a crucial role in the end product that we were given today.

Catch the guys on tour by clicking here!