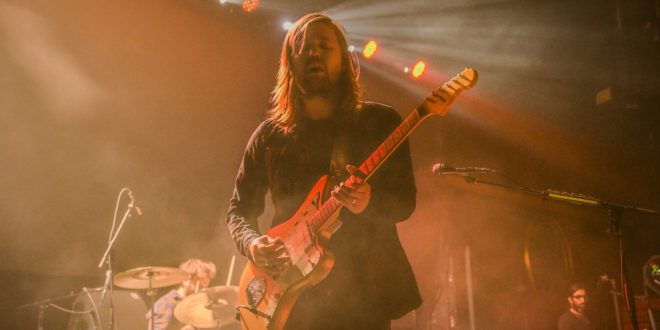 “It’s impossible not to be affected by the fear of it all and the sense of powerlessness,” said the band. “But we made a concerted effort not to make a depressing record because we don’t think anyone wants to hear a dark, depressing record about these times. We wanted to have that feeling of euphoria in song because we weren’t getting it anywhere else.”

The track appears on their fifth album, Love Is All You Love, which is set for release April 12 via So Recordings.

Fans can pre-order Love Is All You Love by clicking HERE.

Love Is All You Love was recorded in London’s Miloco Studios, the band’s Southampton studio and at The Smoakstack in Nashville. Following the amicable departure of drummer Matt Hayward in 2017, Russell Marsden and Emma Richardson started the writing process for the record and quickly accumulated a host of new songs. The band collaborated on the recording with innovative producer Richard X who created an interesting dynamic encouraging a new spirit of experimentation combining live and electronic elements. The album also features percussion from Julian Dorio of Eagles of Death Metal.

“This record is tough and tender with a rebellious spirit,” Richardson and Marsden say about the album. “It is a positive record. It looks to what is possible and how a little love and human kindness can help bring about positive change. We drew on personal experiences, changes in our situation and couldn’t help but be affected by what has been going on in the world politically, culturally and environmentally. Attempting to overcome that sometimes powerless feeling by creating and connecting with people and making something new.”

Since 2009, Band of Skulls has released four studio albums while building a reputation as a phenomenal live act. They have since performed on “The Late Show with David Letterman,” “Late Night with Seth Meyers” and “Last Call with Carson Daly” and have toured with the likes of Muse, Red Hot Chili Peppers, Queens Of The Stone Age and The Black Keys.