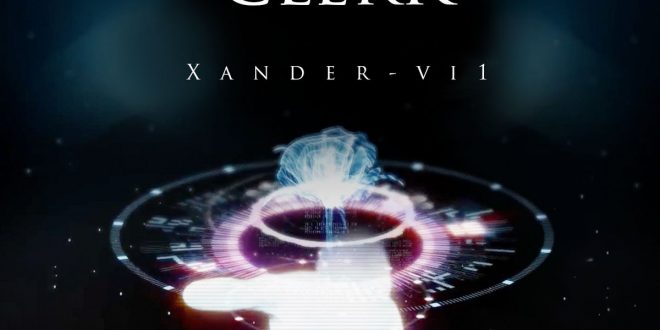 If you love electronic music mixed with some rock spirit, The Clerk’s Xander-Vi1 will garner your attention from the outset. “The Sounds” is steeped in the electronic side of The Clerk’s musical character and he employs a battery of electronic instrumental sounds to make this a memorable beginning for his first solo effort. He brings guitar into the musical mix with the album’s second track “Atlas_” and it’s quite effective, but The Clerk never uses guitar in a predictable fashion. It’s part of a larger sonic tapestry rather than a lead instrument and gives teeth to his electronic approach that mixes things up in an appealing with. The percussion for both of the opening two songs is definitely electronic in origin, but The Clerk does an exceptional job of making it sound as natural as possible despite its programmed origins.

The percussion is much more active for the album’s title song, but it’s never a distraction. The Clerk has keen instincts for track listing and wisely mixes up the slower paced numbers with more energetic tracks like this to keep the listening experience fresh and varied for his audience. His vocal approach, as well, keeps you guessing. We may get a relatively clean vocal in one song while, in the next, The Clerk may opt for post production effects and even some double tracking to reinforce his already superb vocals. His voice is a bit deceptive; dive into one of the more hushed numbers on Xander-Vi1 and you might considered him a limited vocalist, but take the album in as a whole and you will soon realize, as I did, that he has more range than you might initially assume.

“Ghosted” will definitely have its admirers. In keeping with its title, The Clerk fashions a haunting soundscape for listeners, never embracing the melodramatic or overly obvious, and the vocal dovetails well into the arrangement’s tone while pursuing the same tastefulness. This is an important facet of what makes Xander-Vi1 so successful. In the hands of a lesser talent, these songs might have sounded crass, overcooked, but The Clerk modulates his approach with enough artistry that he avoids any potential pitfalls of that nature. “Aura” makes that clear as well. It’s clearly one of the more cinematic moments on the release, a reflection of his talents as a visual artist as well as a musician, and the synthesizers on this cut are used to supreme effect. It’s the second longest song on the album, but there’s never any sense of The Clerk stretching himself too far and coming up short.

The dissonant introduction to “Venus88_0” seems to be setting us up for something very different before it transforms into an airy and confident mid-tempo number. His vocal contributions to the track follow much of the same understated template we hear from the album overall, but it boasts one of the stronger vocal melodies included on Xander-Vi1. “Underline” has colorful synthesizer playing that complements his voice quite nicely and rates as, arguably, the album’s strongest uptempo piece. He brings the release to an end with the sensitively rendered “The Only Thing”, a song emphasizing for a final time how this album is much more about emotion than spaceships and far flung fantasy. It has the feel of a closer, as well, and brings the release to a satisfying conclusion. The Clerk’s Xander-Vi1 will impress lovers of electronic music and make believers out of those who would otherwise dismiss the style; it’s a dazzling and occasionally dizzying, in the best possible way, collection.