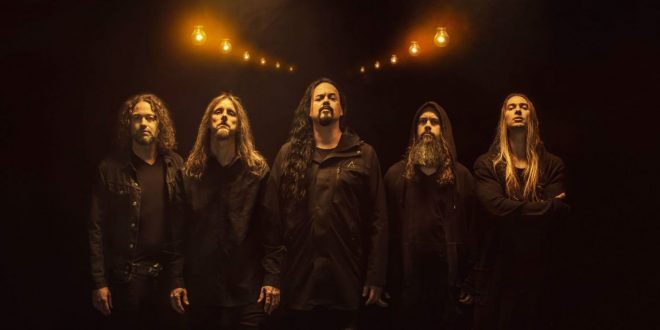 Since the mid-90s, Sweden’s Evergrey have harnessed a darker blend of prog metal with prominent emphasis on chords and textures, a contrast from the genre’s otherwise saturated virtuosic identity. The Gothenburg quartet continues to be a successful charting band, their latest album, The Atlantic, faring decently within several distinct Billboard categories. Next month, Evergrey will begin the European leg of their 2019 tour, with guest spots including Kamelot, Visions of Atlantis, and Bloodred Hourglass.

I caught up with Evergrey bassist Johan Niemann (who joined in 2011) to discuss the tour, the new album, as well as what he can assess about his two-decade-long career.

ME: What are you looking forward to with the upcoming tour?

Johan: We’re going out with Kamelot again and it’s going to be great! I think the last time we toured with them was back in 2013, or something. We’re all acquainted, so it’s really nice.

ME: Having been in over a dozen different bands, do you feel like you learn a lot from those you tour with?

Johan: Yeah, absolutely! The cool thing about touring with other bands is you have these friendships for life, it seems. You meet people from all over the world who have this one thing in common — that’s your passion for music.

ME: That passion started when you were 11 years old. Growing up, which artists helped shape your musicianship?

Johan: When I first really got into music, the first band I remember liking was The Beach Boys. That was actually when I was around five or six. My dad had one of their tapes. Then, it was my brother playing Kiss’s Alive II album. They were my favorite band for a long time and I still love them. It was those classic rock bands like Kiss, Iron Maiden, Scorpions, Alice Cooper. A little later on, it was Metallica, Slayer, and all that stuff.

As time went by, I started playing in bands and got into other types of music. I listened to a lot of jazz fusion stuff — Chick Corea, Weather Report, Tribal Tech, and Mahavishnu Orchestra. all great music to listen to.

ME: You were born in 1977, and your formative time was the early-to-mid 90s. At the time, there was the Swedish indie scene – bands like Brainpool, Saturday Kids, Suredo, and The Cardigans. What was your experience hearing music in Sweden at that point?

Johan: That was the alternative era, and some of those bands were quite good! It was also the time of rap metal. We had this band Clawfinger. Have you heard of them?

Johan: Yeah, they were quite big, and I thought they were great. There’s another band from Gothenburg called LOK — sort of like Rage Against the Machine but with vocals in Swedish. They were great. They just announced this year that they’re reuniting, and will play festivals in Sweden for the 20th anniversary of their first album.

ME: It’s cool you have an appreciation for alternative bands. Usually, when I mention something of that sort, like bands from Ceilidh Productions, to metal musicians, they’d tense up.

ME: Nine years ago, you joined up with Evergrey during the Glorious Collision album. How was your initial transition into the band?

Johan: I had no issues getting into it. I first met Tom Englund and Henrik Danhage in 2001 while playing in Therion, and we had Evergrey opening for us. Henrik wasn’t in the band because he had quit. Back then, there was a different drummer and keyboard player. I didn’t know Jonas Ekdahl or Rikard Zander at the time. When joining in 2011, we were welcomed with open arms, and for me, it was a totally brand new band, since three-fifths of the band left. It was cool and I am happy to say that it’s even better now!

ME: Do you feel like you’re able to express your ideas better in Evergrey now, compared to when you were starting out with them?

Johan: Yeah, and I’m sure it’d still be the case if Hannes Van Dahl and Marcus Jidell were still in the band, since everyone has been together for a much longer time, you know? Jonas and Henrik have known Tom and Rikard longer than I have, but I’ve also been in the band for almost ten years. We’re older and more supportive now and have gotten a lot closer. By that time, you’d treat each other with a lot more respect, and acknowledge everyone’s personal space. Everything is better.

ME: Let’s talk about your new album, The Atlantic, which comes three years after The Storm Within. What went on during the creative process for this album?

Johan: I think this songwriting process has been the same as always. It basically runs into the gamut of someone coming in with maybe two chords, or a certain vibe, and we work off that. Or, someone will bring in an almost completed song that needs certain things here or there. But it’s a wide-open process.

ME: How was production handled to give the album its sound?

Johan: We recorded it in Gothenburg at the same studio as last time, called Top Floor, with the same engineer, Jakob Herrmann. He did the drum sounds while we set the bass sounds. Then, it was mixed by Jacob Hansen in Denmark, who’s done the last three records — this one and the previous two. He’s a great guy to work with because he knows what we’re going for, and is able to translate our ideas into something that sounds great.

ME: I especially like the pacing from “A Silent Arc” to “End of Silence.” You get all this initial buildup, but then on the second side, all the heaviness just unloads. It’s very well utilized.

ME: When it came time to choose which song would feel natural with the others, how did you find that aspect?

Johan: We knew earlier on which song we wanted to open with, and which one we wanted to close with. And then there were a few songs that would fit together in the middle. You need to have a nice ebb and flow; we’re part of that generation who listens to whole records, rather than single songs. That’s what I grew up with, and I prefer to listen to them front to back. It’s very important for us to have that continuity. Especially if you have a concept record, it has to follow a lyrical story. I get that some people don’t care how the songs are ordered, and that’s fine. If you prefer shuffling the record, you can if you want, you know?

ME: From the time the band had begun. I can tell you’ve always been keen on chords and textures, rather than strict virtuosity. Showcasing your playing ability is fine, but you guys find a solid balance between that and other elements.

Johan: Thank you. That’s what we were aiming for. Sure, we can play, but we’re not Dream Theater. We love Dream Theater, but that’s not what we do. I guess, in that respect, we have more in common with a band like Queensryche. They’re not flashy that way. That’s not to say that Dream Theater aren’t also talented songwriters, but they have another element in their music that we don’t. You have to work with what you have.

ME: All things considered, do you ever take a step back and look at how much you’ve grown, as both a person and musician?

We’ve been fortunate to have gone this long, and to have fans, at this point in our career, still willing to hear new music from us. It’s unbelievable, and we are very, very grateful.

Johan: First of all, thank you for all the support over the years. We will get our asses to North America; sometime in the fall, I think. We’re doing the ProgPower festival in September, I believe, so around that time, we’ll be in the States, and hopefully Canada.

I come from a family who is passionate about all things music. I learned to sing at an early age, and by 13, had my very own Fender Strat guitar. I tried my hardest at learning all that I could. Because I was born with cerebral palsy, I had to teach myself an adaptive playing style. I learned to write and record my own music, despite these difficulties. In college, I started making great use of my writing abilities by reviewing music, as well as copy editing. I guess it's best to stick with what you know, while welcoming a fair challenge at the same time.
Previous Hatchie announces debut album, watch the music video for first single “Without A Blush” now
Next iTunes Chart-Topping Duo And Production Team Announces “FaB Pop Star 2019” Contest