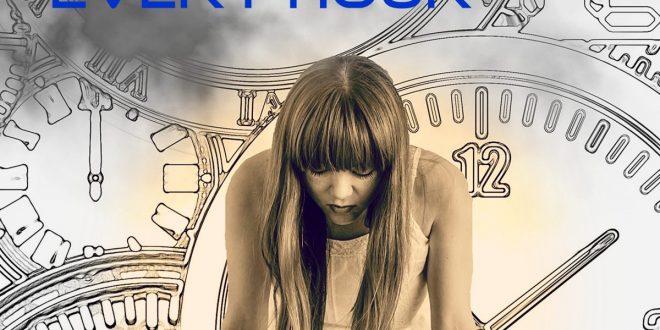 “We’ve always been fans of the sixties ballads sung by female singers such as Dusty Springfield, Petula Clark and Cilla Black. We hope that this track proves that we can write songs in all genres. ”— Neil Fitzsimon, FaB

“One of the finest collections of pure pop songs I have heard, from any one band, since the sixties” – Jamsphere Magazine

With the 2018 release of the title track and first single from their critically acclaimed album, “Big Blue World,” the London songwriting and production duo of Neil Fitzsimon and Bee Brogan set the pop music world on its ears. The lyric video for the single reached #2 on the Beat100 World Videos chart. FaB followed that success with a second single, “Girl In a Gilded Cage.” The track went all the way to #1 on the iTunes Belgium charts, ahead of acts like Panic! At The Disco, Imagine Dragons, Halsey and Coldplay.

Now, FaB look to duplicate their chart successes with the third single release from “Big Blue World,” titled “One Minute, Every Hour.” The song is being released by WTPL Records on February 15th, 2019.

“We always really loved a Kirsty Maccoll track called, ‘They Don’t Know About Us’, which was covered by Tracy Ulman, who had a big hit with it,” said Neil Fitzsimon. “We’ve always been fans of the sixties ballads sung by female singers such as Dusty Springfield, Petula Clark and Cilla Black. The original demo was actually done in the style of Dusty Springfield, but the producer we were working with at the time had also worked on the number one hit, ‘China in your Hand’ by T’pau, and he saw the song more in that vein. So that’s what we went with. Dave Bronze (Eric Clapton’s bass player) and Bias Boshell (Moody Blues) both played on the track,, as did Pip Williams, who played guitar on the Walker Brothers’ hit, ‘No Regrets’. We hope that this track proves that we can write songs in all genres. The song was mixed at Abbey Road Studios and mastered at the CBS Hit Factory.”

Watch the official lyric video for “One Minute Every Hour” at https://www.youtube.com/watch?v=usEBu81WtOI&feature=youtu.be

ABOUT FAB: Neil Fitzsimon, the songwriter, and Bee Brogan, the vocalist, aim to produce “Pure Pop For Now People.” Preferring to remain faceless in an industry that holds image in high regard, the pair have gone on to form a songwriting/production partnership that led to placement of their songs in Film and TV, including a USA Sci-Fi Feature Film. They also wrote a musical, Jack Dagger, which was showcased at the Greenwich Theatre, London for the Musical Futures Award. It was also showcased at the Bridewell and the Royal College of Music in London.

Recently, the duo had a track reach number 3 on a French national download chart. Their song, “This Is Love” earned the duo Semi-Finalist status in the Eurovision Contest. Their lyric videos for “Big Blue World” and “Girl in a Gilded Cage” both reached #2 on the Beat100.com World Videos chart, for which they were recognized by the Indie Music Hall of Fame. The latter reached #1 on the Belgium iTunes singles sales charts. The Billboard Magazine Emerging Artists have been featured on the NBC Radio and Westwood One Radio networks. They’ve recently recorded tracks with longtime David Bowie drummer, Woody Woodmansey.

Fitzsimon and Brogan (FaB) “One Minute Every Hour” Lyric Video