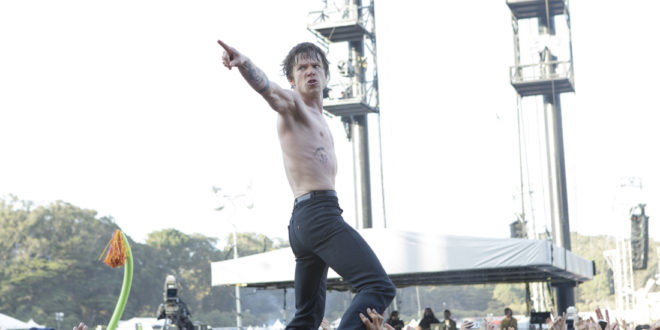 Last week, Cage The Elephant announced their return with the release of their fifth studio album, Social Cues, on April 19th via RCA Records. Today, the band confirm a co-headlining tour with Beck, who is featured on the album track “Night Running.” The Night Running Tour will begin on July 9th and includes stops at The Gorge in George, WA, Shoreline Amphitheater in Mountain View, CA, and NYC’s Forest Hill Stadium. Spoon has also been announced as a special guest on the tour and Starcrawler, Sunflower Bean and Wild Belle will open as well in select cities.Full dates below. Prior to the tour, the band is headlining Shaky Knees Festival on May 4th in Atlanta.

Tickets go on sale to the general public beginning Friday, February 15th at local time at LiveNation.com. Beck and Cage The Elephant have partnered up with PLUS1and $1 from every ticket sold will be donated back into each city they are playing in, supporting local food security initiatives as they work towards ending hunger in their communities.

Social Cues was produced by John Hill (Santigold, Florence + The Machine, Portugal. The Man, tUnE-yArDs), recorded at Battle Tapes Recording, Blackbird Studio and Sound Emporium in Nashville and The Village Recording Studio in Los Angeles, and mixed by Tom Elmhirst and mastered by Randy Merrill in New York City.

Deeply inspired by punk music, brothers Matt and Brad Shultz began playing music in high-school with fellow students Jared Champion and Daniel Tichenor. Shortly after forming the band, they made the bold move to London to begin their career. Their self-titled debut album gained them international attention, catapulting them up the Billboard Alternative and Rock charts and achieving RIAA Platinum certification. Cage the Elephant has released three additional studio albums – 2011’s Thank You, Happy Birthday, the Gold-certified Melophobia and the GRAMMY®-winning Tell Me I’m Pretty.  At radio, Cage The Elephant holds the record for the most #1 Alternative songs of any artist this decade. Cage The Elephant have had 7 Billboard #1 singles with 11 singles landing in the Billboard Top 10 and digitally have a combined 1.5 billion streams worldwide. Their most recent release was their expansive live album, Unpeeled, which found the band performing stripped down and backed by a string quartet and a choir. Based in Nashville, Cage The Elephant is vocalist Matt Shultz, rhythm guitarist Brad Shultz, drummer Jared Champion, bassist Daniel Tichenor, lead guitarist Nick Bockrath and keyboardist Matthan Minster.